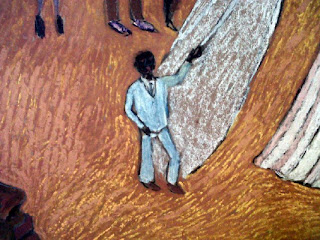 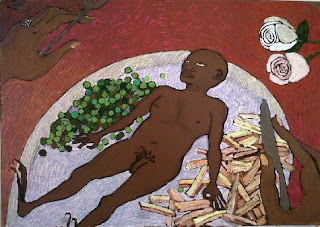 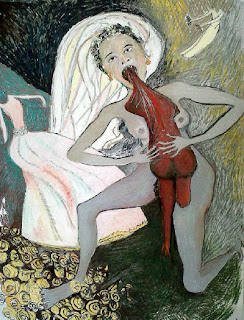 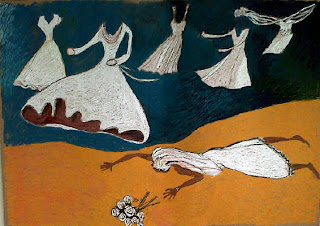 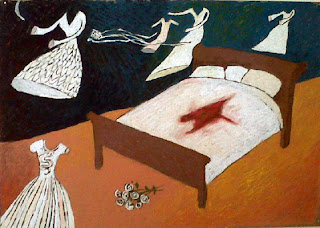 I came across the work of Amanda Holiday in a South African magazine. It mentioned her leaving Sierra Leone at the age of 5 fleetingly. As you might imagine i immediately claimed her as daughter of the soil and i was determined to find out why the blog i read didn’t go further into her Sierra Leonean heritage. After much googling i discovered that she was a fine painter and scriptwriter. I reached out to her on facebook and i discovered a story that reminded me of Aminata Forna, and my friend Peter Conteh..both products of  English-Sierra Leonean unions, both artists…aminata a writer and peter a film maker.

Amanda Holiday left Sierra Leone at the age of 5years old after her parents divorced. Her mother, English had married her Mende father back in the 50’s, they met at Edinburg University.  Amanda returned to Sierra Leone after 20 years to find her father in 1990. Her father…family name Feika was the grandson of the paramount chief of Sendumei, in the East of Sierra leone

“In the dim bar, I sat across the table from a thin, stern man with a deep frown. We sat and stared – a twenty year gaze. He told me; ‘You look just like your mother.’ We talked. He asked after my sister. He was vague – sweeping his hands through an unknown past; he hadn’t expected questions. He was still cross with my mother and said she’d ‘taken all the furniture’ and never told him she wasn’t coming back.

I told him I had hoped he was going to be rich and have lots of diamonds. He laughed.

Penny and I travelled round Freetown with my brother – we saw the prison, the cotton tree, the bars and schools. Sometimes a wave of memory came in the smell of food – ‘sakitomboy’ or palm oil and I was five again.”

Amanda Holiday nee Feika
Acclaimed writer and director who studied Fine Art Painting at Wimbledon School of Art in the UK and exhibited her large scale drawings nationally before moving into film. She studied drama direction for one year at the UK’s National Film and Television school and wrote and directed a number of short experimental dramas and documentaries funded variously by the Arts Council, C4 and the BFI.

From 1996 Holiday concentrated on scriptwriting and her feature dramas received financial support from European Script Fund, Media II and British Screen and placed in the finals of international scriptwriting contests. Between 2001 and 2009 Holiday was resident in South Africa where she scripted numerous educational TV programmes and directed 2 children’s TV series aired on SABC. She collaborated on ‘Ijazz’ a photo book spanning 100 years of South Africa’s jazz history – funded by the SA Department of Arts and Culture, the project is awaiting completion finance.

Holiday returned to live permanently in the UK in 2010
Bio culled from: http://www.uk.filmcrewpro.com/view.php?uid=264129
read more about Amanda’s vist to Sierra Leone after 20 years to meet her father on her blog:
http://far-away-scriptwriter.blogspot.com/2007/10/family-2.html
To see more of her work please visit SLAM online : http://artslammagazine.com/?p=6661