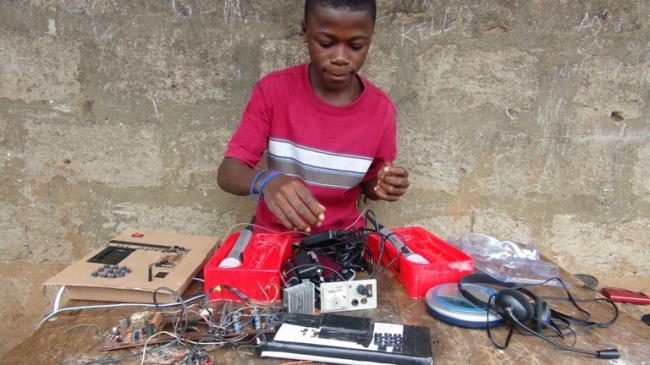 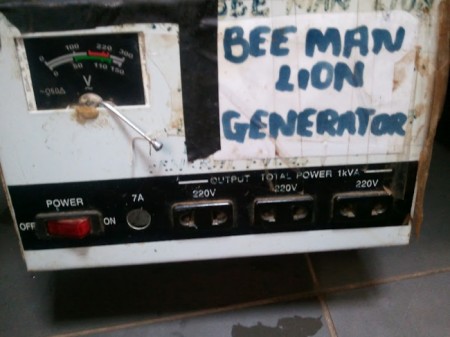 Today I am uber geeked to tell you about Kelvin Doe, a 16-year-old who is in New York right now because he beat 300 high schoolers in Sierra Leone in an MIT supported initiative to promote innovation in West Africa. Doe and two classmates at the Albert Academy in Freetown built a generator and radio  transmitter . It was one out of 8 selected as winners by the international group of judges put together by Global Minimum (Gmin) – the non-profit behind the Innovate Salone “A De Mak Am” Competition. Co-founded by Bo Town bred MIT Media Lab Engineer David Sengeh, the goal of the competition is to create a system where any young student in Sierra Leone can dream of an idea, and have a platform where he/she can make the dream happen.

Gmin offers up to $1500 to teams of students who submit local innovative solutions in the fields of Health, Energy, Education, Agriculture, Transportation, Telecommunications, Civic Media, and Engineering. Students apply under their schools, and teachers serve as mentors to the teams.

Kelvin Doe has already  presented his prototypes live on Google + at the 2012 Summer Maker Camp hosted by Make. And now he is also going to be on a panel at the 2012 World Maker Faire in NYC. In addition to this Kelvin will be a resident practitioner with the MIT International Development.

At age 10, Kelvin began putting together parts for what would be the first locally made FM radio station in SL. By age 13, he had built his own homemade batteries from acid, metal, soda and a few other things. Why? Because he could not afford batteries and he once opened a battery to see that it was only composed of a black substance and a metal. Why couldn’t he make himself one? He did.

He then used his battery as fuel for a 12V generator that he designed and manufactured. The generator would power his designed mixer, amplifier studio set and FM radio station. For Kelvin, he made the FM radio station to give voice to the youth in his community and to practice his favorite pastime: being a DJ. He DJ’s every kid’s birthday party for a small fee.

Follow Team Gmin and Kelvin Doe on Google Plus