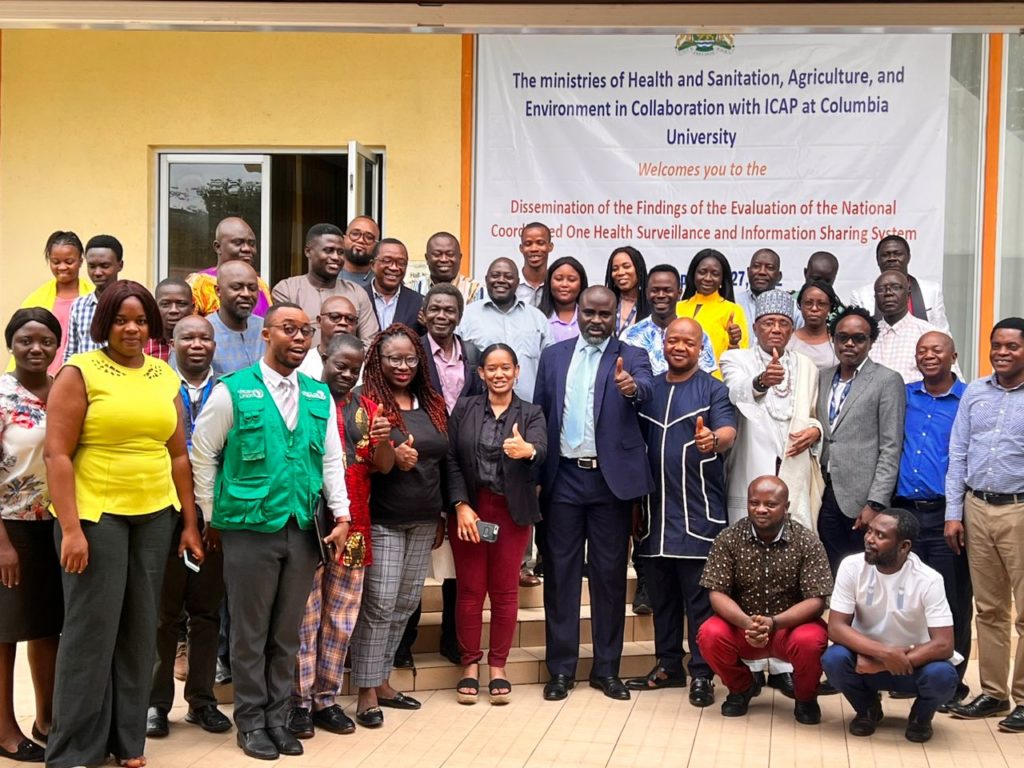 On Tuesday, September 27, 2022, ICAP at Columbia University in partnership with the Ministry of Health and Sanitation, the Ministry of Agriculture, and the Ministry of Environment held an information-sharing event on the findings of the evaluation of the “National Health Coordinated One Health Surveillance System” at the Bintumani Conference Hall in Freetown.

Present at the information sharing conference were representatives from USAID, US-CDC, Africa-CDC, the University of Sierra Leone, the Office of National Security, and other relevant agencies and individuals in the health sector.

In his brief opening statement ICAP’s Technical Director Dr. Eric Ikoona, started by recognizing the efforts of all partners that made the evaluation project a success. He further explained that the evaluation will go a long way to strengthen and improve a coordinated health surveillance system in Sierra Leone.

Dr. Ikoona further added that it was the first time that such an evaluation was conducted in which various sectors were involved. He ended by specifically thanking the US-Government through US-CDC for their technical and financial support in carrying out this work, he also thanked FAO, WHO, Africa-CDC, and the Government of Sierra Leone.

Over the years Sierra Leone experienced many health-related emergencies, most of which came from humans, animals, and the environment, their diseases were said to be zoonotic. Examples of such diseases were the Ebola Virus, Lasa Fever, Cholera, Rabies, and the global Coronavirus Pandemic outbreak.

In 2016 Sierra Leone was the sixth country in the African Region to undergo Joint External Examination (JEE). Recommendations from the JEE informed that a National Action Plan for Health Security is developed and or established.

He further explained that the recent global health crisis, the Covid-19 pandemic, exposed how fragile the global health systems are. Partners agencies express delight in such an impressive project in the country.

Dr. Mohamed Vandi adopted the development plan and stated that government is on the verge of establishing a National Public Health Agency.

“This activity is extremely important for the Ministry of Health and Sanitation. We are in a process of establishing a National Public Health Agency, and the cardinal roles, and responsibilities of the Agency are to develop the capacity and competencies within the country,” he said.

He finally said that the agency will be responsible for detecting, mitigating the spread, and confirming to ensure switch respond on time and effectively to any public health emergency that will occur.