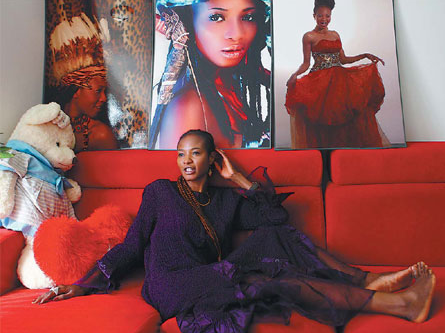 In a recent interview in ChinaDaily Miss Sierra Leone 2009 Mariatu Kargbo aka Maria talks candidly about her dream of becoming Chinese. Sprawled out on a red sofa underneath large blow up images of herself the singer model talks about learning and performing Bianlian – a face mask opera dance she performed at the Miss World Pageant. Kargbo is said to be the first African to have learned and performed the art.

We love ‘Maria’ not just because she placed better than anyone else has done for Sierra Leone at the Miss World Pageant in recent times but because we know that she had to have worked really hard to be able to master the Chinese dance she did there. But when a former Miss Sierra Leone says that her dream is to become Chinese what can we do but ask ‘WTF’? Wanting Chinese citizenship is one thing, but for it to be your dream to bring their culture to the world and not your own is at least questionable for someone who has represented Sierra Leone on an international stage. Check out quotes from the interview below but follow link below for full article

Maria says she brought the art to the world’s attention to show her special gratitude to China. “I have two dreams: becoming Chinese and bringing Chinese culture to the world.

Maria has also learned Peking Opera, calligraphy and Mandarin – and even local dialects – to prove how much she wants “to be a black Chinese girl”.

Her latest goal is finding a Chinese husband, she says.

“I had three Chinese boyfriends, but all failed. Chinese men are very shy and like girls to be small and tender. But I am big and straightforward,” she says, laughing.