Home Featured Sierra Leone: What we know so far about the mudslide disaster in Freetown
FeaturedNews & Politics

Sierra Leone: What we know so far about the mudslide disaster in Freetown

Sunday night heavy rains caused a major landslide along the Freetown Peninsular, and flooded other parts of the city. Red Cross Officials have so far put the death toll at over 300. While this was a catastrophe, this is not the first time in the last couple years that floods have killed whole families and destroyed property.

In 2014 there was a flood that worsened the ebola crisis, and just a year later in 2015 a flood left 4 dead and 3800 people homeless. They had to find temporary shelter at the national stadium. Those worse hit at the time were residents of slum communities. This time the mudslide has victims across all socio-economic classes.

Citizen journalists took to social media to report on the disaster, again highlighting the importance of Facebook & Whatsapp as the most powerful tools  for the dissemination of information amongst Sierra Leoneans at home and abroad.

In the time the disaster has happened (less than 24 hours) individuals (most of whom do not have relief organizations and are in the diaspora) have launched GoFundMe pages to raise funds they say will go towards disaster relief. 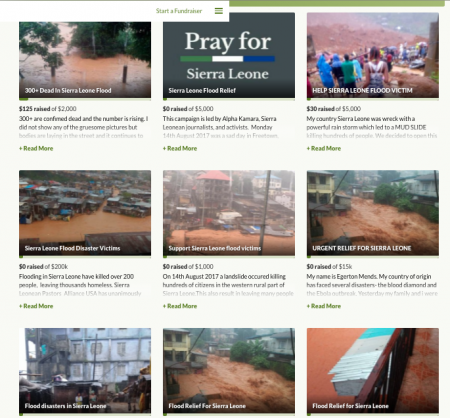 The President made a statement today. He said that all the agencies are doing what the can by way of disaster relief. He thanked the Armed Forces for their service in search and recovery.

Many more individuals and families are believed missing and or dead. It might take a couple of weeks for the true damage and death toll are known. Those seeking to help or assist should find established organizations and institutions who have a history of disaster relief and community action or risk contributing to someone’s personal life fund.

Things needed right away are; shelter, food, blankets, water, clothes, and everyday basics for those who may no longer have a home. If you don’t know who to trust contact the Sierra Leone Red Cross and UNICEF Sierra Leone to figure how to get involved. This will also be a good time to donate blood at a local blood bank.

The Office of National Security has listed the following locations as part of the disaster area; either affected by major flooding or mudslide:

Juba and it Environment

Citizens are advised to evacuate the following areas if possible while others are being asked to keep away.

Sierra Leone: Before you do business with Dr. Bahsoon of Bennimix read this

African Diaspora Fashion: Prince Zamira is a new brand for men and women

The Renaissance Movement’s position statement on the Commissions...