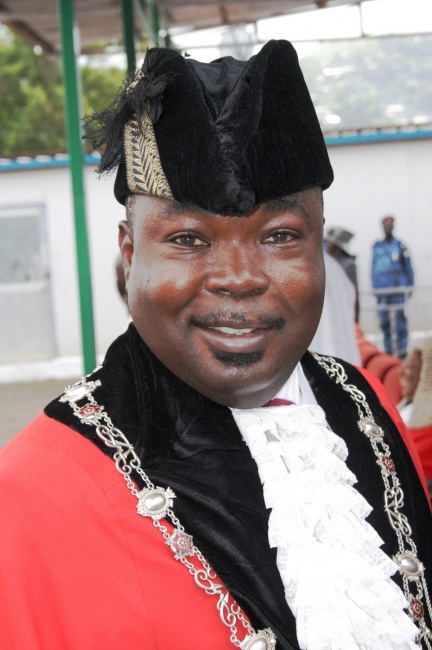 Mayor Herbert George Williams made over $1.4 million disappear under his watch at the Freetown City Council (c) Photo: Salone Reporter

UPDATE: Herbert George-Williams sentenced to 3 years in jail or fined $35,000 (170 million leones) for violating procurement policies for a contract he signed with Morgan Heritage back in December 2010. He has subsequently been suspended from him job. The verdict on his case was delivered last week when he was found guilty of 2 of the 25 charges he was arrested for last year.

The Mayor of Freetown Municipality Herbert Adekemi George-Williams is currently in lock up at Pa Demba Road Prison after being found guilty of two of the 25 counts of corruption he was charged with late last year.

The Anti Corruption Commission charged George-Williams, the Chief Administrator, Bowenson Frederick Philips, and five others in the High Court in Freetown on the 28th of November, 2011 for various corruption and procurement violation offenses.

The charges which totaled 25 were for the following:

The Commissioner of the ACC, Joseph Fitzgerald Kamara, said the indictment is a welcome move and that it was momentous in the fight against corruption.

“Today, our courts have reaffirmed that indeed in Sierra Leone, no man is above the law.”

The Mayor and the rest of his corrupt cronies will remain Pademba Road Prisons until Wednesday 15th August 2012 when they return to court for sentencing. This is the first time in the history of Sierra Leone that the prestigious seat of mayorship has been thus blemished.

Relatives and friends of the mayor and the other accused wept, while some supporters accused the APC Government for allowing the mayor to be remanded in prisons.

When called by the Court Clerk, Mohamed Mansaray, to enter the dock, the mayor smiled as he walked coyly passes the official.

The acting mayor of the Freetown City Council, Alhaji Gibril Kanu, was absent in court and all efforts to contact him proved futile.

Reacting to the news of the verdict  Abdul Habib, Programme Director of the Network Movement for Democracy and Human Right, said this verdict will affect taxation.

“There are so many challenges faced by council and if efforts are not made to correct them tax payers money will be misused,” he noted.

Habib said the failures by council to fully explain to the public how they utilize public money are also a reason for people’s reluctance to pay for local tax. The public had been crying for intervention on the issue and it has finally come to rest,” he said.

THINGS TO DO AT HOME