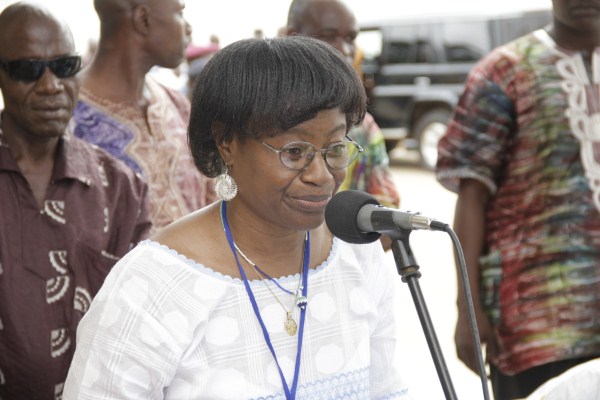 Four months ahead of Sierra Leone’s elections political parties that should be deep in opposition have instead united against paying nomination fees to the the National Electoral Commission (NEC). Longstanding NEC Chair-Lady, Dr. Christiana Thorpe,  announced last week that political parties that intend to nominate candidates for the positions of President, MP, Mayor, and Counselor will be asked to pay before their candidature will be accepted.

NEC stands to raise Le. 900 million if each party was to nominate a presidential candidate. But with the race also on for Mayors, MPs and Local Counselors in close to 600 seats the commission could raise billions of leones.

In a joint communiqué signed by the SLPP, PMDC, NDA, UNPP, PDP, CDP, UDM and the PLP; the parties condemned the nomination fees as unconstitutional, and exorbitant when compared with the current state of the economy. The ruling party, the APC did not sign the protest.

Instead Leonard Balogun Koroma speaking on behalf of the All People’s Congress made on appearance on ‘National Encounter’ a debate talk show on the Sierra Leone Broadcasting Corporation where he argued that his party would not stand against the NEC ruling. He attacked the leading opposition SLPP stance against the fees as a double standard.

“The SLPP made all aspirants vying for the flag bearer of the party pay Le. 50 million each,” he argued.

There will be 588 elective offices to contest for in November. Balogun said that those looking to hold the highest offices in the land should put up if they want to enjoy the perks.

“Members of Parliament have so many opportunities: diplomatic passports, housing allowance, 4WD, body guards, gratuity, pension, personal license plate, and many other privileges,” he noted .

“Women and young people will be discouraged to contribute in the development of the country. We want them to be encouraged. These fees cannot help them,” he said.

The practicing lawyer further argued that NEC had no mandate to demand money from elective members.

He also said that the Le 50 million levied against contestants for the SLPP flag bearer was to raise funds for the party and should not be seen as a reason for the party to support NEC’s decision.

He said the nomination fees announced by NEC have no legal force under the laws of Sierra Leone and that the power to prescribe the nomination fee is vested in Parliament as evidenced in Section 45 (5) and 31 (1) of the Electoral Laws Act 2002.

The Western Area Human Rights Committee yesterday engaged members of the National Electoral Commission (NEC) to explain the rationale behind the increase in candidacy fee for political contestants.

The Chairman of the Committee, James Mathew, said the purpose of the meeting was to looking at the possibility of bringing together all the stakeholders to talk on the issue and find a positive solution.

Mathew said the basis of democracy is for every citizen to participate in the process but that the recent pronouncement by NEC has created differing opinions in the country.

“Some school of thought belief that democracy means public participation in decision-making processes and that money should not be the determinant of a citizen’s aspiration to contest,” he said.