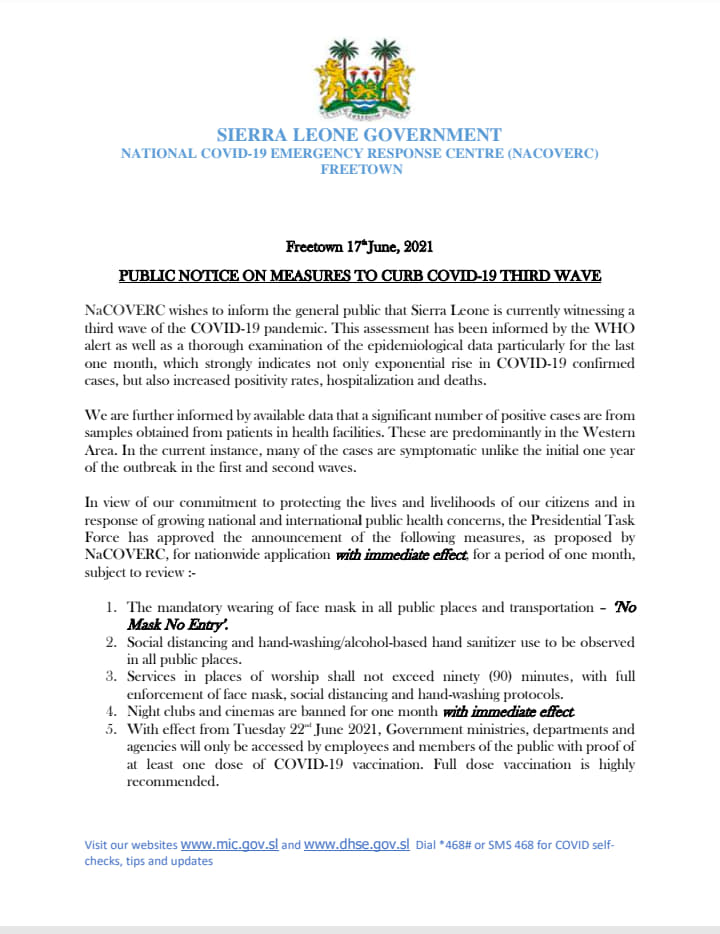 The National Covid-19 Emergency Response Centre {NaCOVERC}, on Thursday 17th June 2021, issued a Press Statement, once again putting a ban on all large public gatherings with effect from Tuesday 22nd June 2021, and complete ban, with immediate effect, on all Night Clubs and Cinemas for one month. The release was received by the public with mixed feelings, especially in the area of holding all sporting events within closed doors with no spectators and only participants and officials with proof of vaccination. Furthermore, weddings, funerals, receptions, naming ceremonies and all other public events should not have more than 50 people, whilst religious gatherings are only permitted at last for 90 minutes and should observe all covid-19 protocols, including mandatory use of face masks.

On 15th June, Native Consortium & Research Center {NCRC} issued a release where it posited that the Government, through the Petroleum Regulatory Authority {PRA}, is about to increase the price of fuel from Le.8,500 to Le.9,500 per liter anytime in July 2021. They premised their release on an earlier release of the Petroleum Regulatory Agency of 7 June 2021, which had notified the likely increase.

The Project Manager of the Sierra Leone Integrated and Resilient Urban Mobility Project under the Ministry of Transport and Aviation, Umaru Katta has said in Freetown that the construction of four overhead foot bridges for pedestrians at Jui, Shell, Wilberforce and Lumley will soon commence. He said the contract has been awarded to potential contractors. He stressed that the procurement process for the commencement and installation of hybrid street lights, guard rails and traffic lights are in an advanced stage. The fifty million United States Dollars {USD50M} World Bank project will soon commence.