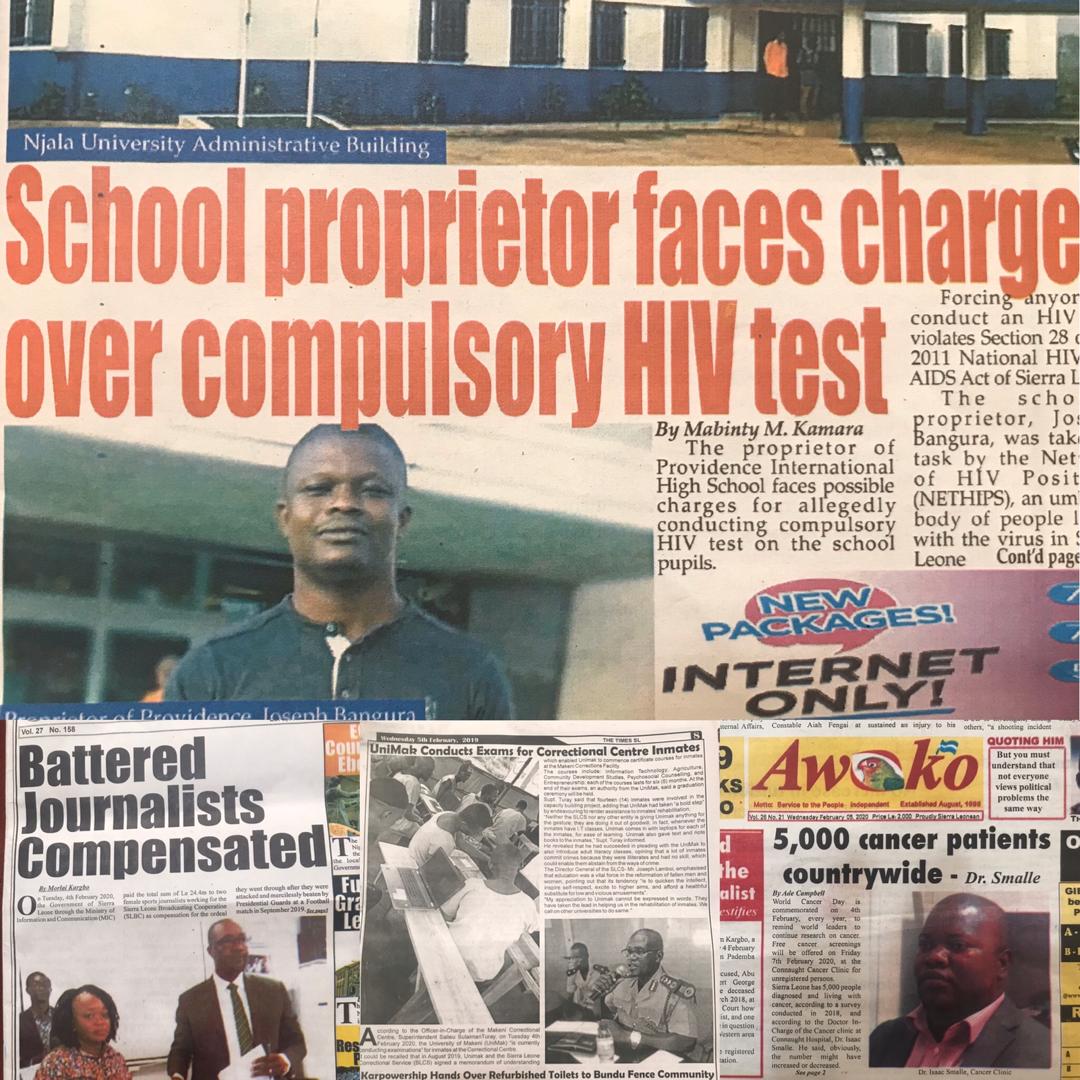 The two female sports journalists who were beaten by the president’s security guards at a football match in September 2019 receive the sum of SLL 24.4 million from the government through the Ministry of Information and Communication as compensation. This came about as a result of the public outcry and investigation of the incident by a committee of members made up of representatives from SWASAL, SLAJ, WIMSAL, MIC, and other civil society organizations.

The proprietor of Providence International High School faces charges for allegedly conducting compulsory HIV tests on the school pupils. With support from the National Aids Secretariat (NAS), NETHIPS filed a complaint with the Sierra Leone Police which confirmed that it had invited the school authorities as part of the investigation into the issue. This came about as a result of calls made by parents of the children who were allegedly subjected to compulsory HIV testing on diverse dates in 2019 and 2020. According to NAS, HIV testing is a voluntary and confidential test done by health workers. The school forcing pupils to do it is not only contravening the law but also abusing the rights of the children.

World cancer day is commemorated on the 4th of February every year to remind world leaders to continue doing research on cancer. Free cancer screenings will be offered on  Friday 7th February at the Connaught Cancer Clinic for unregistered persons. According to the survey held in 2018, Sierra Leone has 5,000 people diagnosed and living with cancer. The number might have increased or decreased says Dr. Isaac Smalle doctor in charge of the Cancer Clinic at Connaught.

Superintendent Salieu Sulaiman Turay officer in charge of the Makeni Correctional Centre said on Tuesday 4th February that the University of Makeni(UNIMAK) is conducting examinations for inmates at the correctional center. In August 2019, a memorandum of understanding was signed by UNIMAK and Sierra Leone Correctional Centre in order for UNIMAK to start certificate courses for inmates at the Makeni Correction Facility. UNIMAK singlehandedly provide notebooks, textbooks, laptops based on the course for each inmate for ease of learning. Fourteen inmates are actually involved in the capacity building project. Each of the courses lasts for six months and a graduation ceremony will be held after the end of the course.