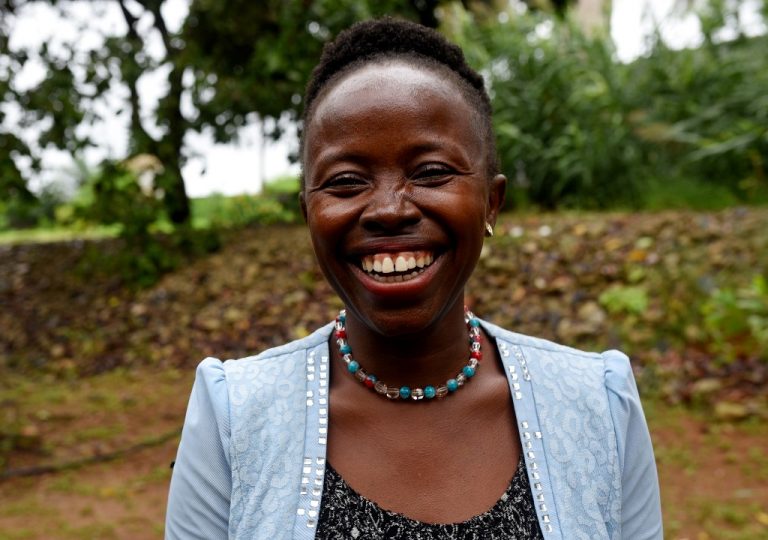 Nancy Gbamoi became the first person in Sierra Leone to open a bank account by accessing her digital ID with her thumbprint from the NCRA database. A teacher from Port Loko District, she said that this wasn’t her first bank account, but the digital identification will be easier to use.

“If you misplace your ID card and you want to use some money from the bank you won’t be able to make a financial transaction,” said Gbamoi.
“Now I’ll have access to my money even if I don’t have my ID with me.”

The digital ID after pilot testing and implementation for financial services will be rolled out as the principal means of identification for citizens seeking to receive services from the government. UN Sustainable Goal 16 requires all nations to provide legal identity for all citizens to build effective, accountable, and inclusive institutions.

According to a World Bank 2018 Sierra Leone Financial Inclusion Project Fact Sheet, 12.4 percent of adults in Sierra Leone have a bank account. The total number of those with access to formal financial services, including mobile money is 19.8 percent. Opening a bank account starts with establishing the identity of each customer. Banks must meet a Know Your Customer (KYC) requirement, which prevents fraud and lets financial institutions verify and authenticate each account holder. A completed KYC must have an ID, address and in some cases referees. But in Sierra Leone identification is a burden both on banks and potential customers.

“A lot of our people still do not have their physical IDs. Even though the National Citizen Registry Registry holds about 5.1 million registrants of our citizens,” said Dr. Patricia Laverley, Deputy Minister of Finance.

“The new platform will help about 20% of financially excluded adults who are unable to access financial services because they lack the correct documentation to prove their identity.”

President Julius Maada Bio launched the digital platform, which is led by the Bank of Sierra Leone (BSL) in collaboration with the Ministry of Finance and supported by UNDP and Kiva. Kiva is an American company that gives loans to individuals who would otherwise not have access to credit from banks. They operate in 80 countries, including Sierra Leone.

“At the 74th session of the United Nations General Assembly last year, I announced a partnership with the UN and Kiva to launch a bold new initiative designed to give a country’s several million citizens access to financial services. Today, we have accomplished that objective,” said President Bio.

“My government has developed a National Digital Identification Platform. I announce with pride that this is Africa’s first Blockchain and decentralized national digital ID system.”

Although Kiva is backstopping the platform with Kiva Protocol – a digital identification system that uses Blockchain distributed ledger technology, the NDIP data usage will be governed by Sierra Leone’s laws. The Directorate of Science, Technology, and Innovation provided the policy guidelines for use, access, and protection of citizen data.

“We worked with partners in government to provide technical support where needed. For example, after NCRA reviewed the Data Protection Agreement, DSTI further scrutinized the agreement to ensure that the protection of data is a paramount activity even in this pilot. Because Sierra Leone does not have any current modern data protection laws, it is important that we use this process to enhance innovation, protect citizens while laying the groundwork for comprehensive legislation.”

The only way that anyone can access the citizen data is after that citizen has unlocked their ID and consented to share their data. Speaking at the launch of Africa’s first blockchain national data ID platform, Dr. Samuel Doe, UNDP Country Director for Sierra Leone, said that collaboration and determination allowed Sierra Leone to act in record speed.

“To develop a distributed ledger technology-based credit reference platform that will provide for national identity, financial profiles, and financial inclusion is a shining example of a whole of government response to a development challenge.”

Each registered citizen can unlock their digital ID with their thumbprint. Once unlocked citizens can grant access to their bio data to any institution connected to the digital ID platform. The technology that collects, stores, and makes the platform work is an encrypted distributed data storage system known as Blockchain. Blockchain ensures that the e-IDs will be decentralized, transferable, and where need be interoperable. Once deployed to national scale Ministries, Departments, and Agencies (MDAs), will be able to use the digital ID to provide social services whenever a citizen grants them access.

The NCRA collected Nancy Gbamoi’s data along with over 3.1 million others who registered to vote for the 2018 elections. The NCRA database also includes 2 million additional citizen biometric data collected from the same for the 2012 elections, and other registers like government payroll for the civil service.

“For the government, a critical function we are seeking to optimize for is service delivery and citizen engagement. To ensure that the right citizen or resident gets their benefits and services at the right time, in the right place, we need to be able to authenticate who they are,” said Dr. Sengeh.

“We are hoping that this platform can be used to bring services to citizens across all spectrums: for those in far remote areas needing to access their postal mail or mobile money to those in cities wanting to pay for public and private sector services from their handheld devices. The opportunity is in our hands.”

Gbamoi’s bio data and other information unique to her is now digitally accessible. She and 5,1 million citizens now has a unique digital identity that the government can verify.