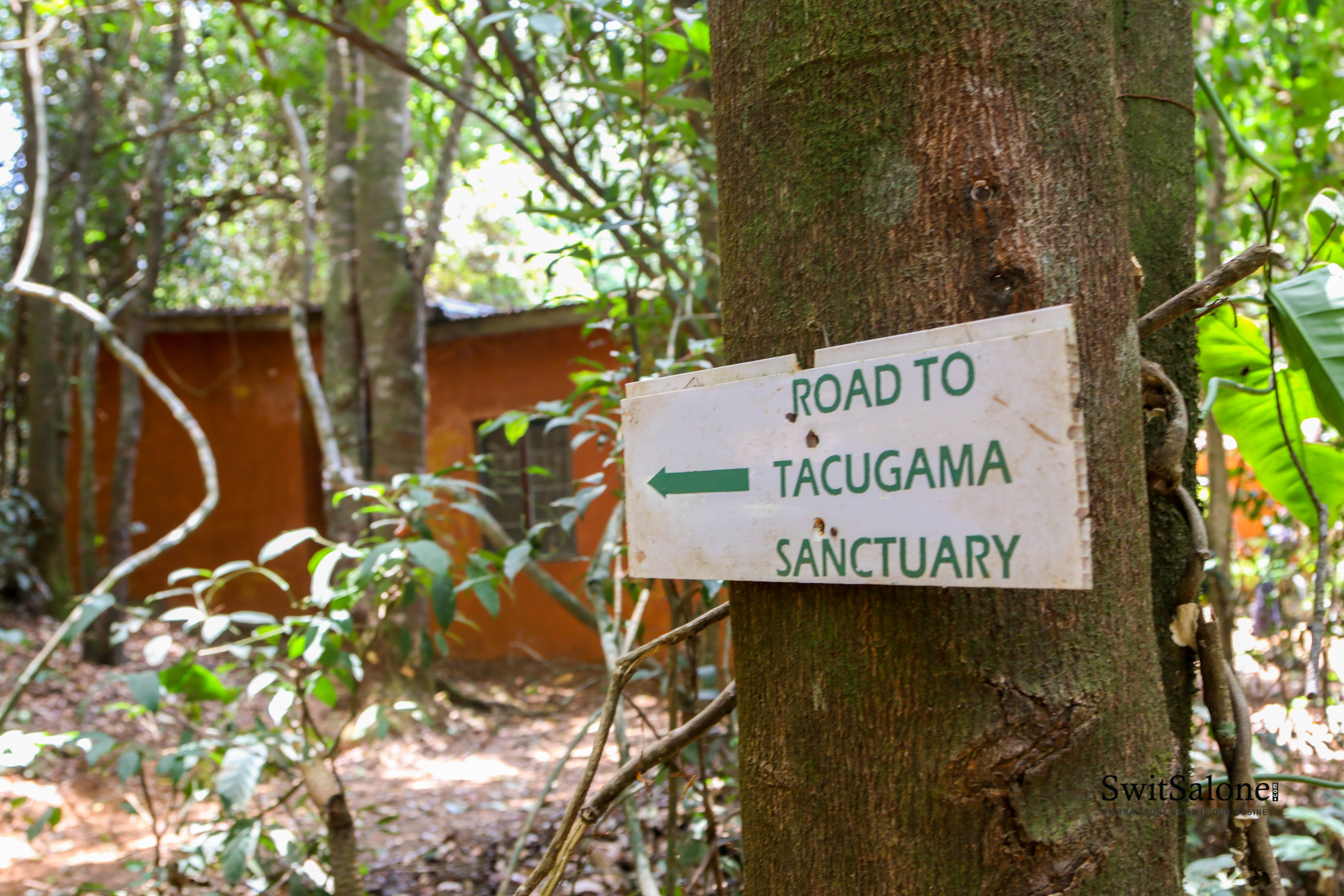 Sierra Leone is a land of beautiful beaches, majestic mountains, and wondrous green forests. She also has hidden treasures, one of which is Tacugama Chimpanzee Sanctuary, located in the village of Regent-East of Freetown. In the Western Area Peninsula National Park, this beautiful rainforest also protects the capital’s primary watershed. The sanctuary covers 100 acres of the 17,688 hectare national park.

Mr. Bala Amarasekaran is the Programme Director of the Tacugama Chimpanzee Sanctuary. A  Sri Lankan native, but a Sierra Leonean at heart. He moved to Sierra Leone in his teens and has been here ever since. A man very passionate about animals- he encountered a two year old Chimpanzee whilst travelling from Freetown to Makeni, bought him for $30 and later named Bruno.

Tacugama Chimpanzee Sanctuary opened 20 years ago – October 1995. At that point, there were only five chimpanzees in the sanctuary. Mr. Bala owned all five (Bruno, Julie, Charlie Boy, Philip and Augustine) as they had been living with him in his house at Smart Farm. Their presence is still greatly felt in the sanctuary, as there are placards and banners with their names and pictures not only in the Resource Centre, but also in prime locations on the footpath in the sanctuary.

There are now over 77 chimpanzees at the Tacugama Chimpanzee Sanctuary ranging in age from 16 months to 35 years. In addition, they have been split into five groups from living in cages in quarantine, to living freely in the forest enclosure.

When approaching the Sanctaury, one has to have a keen eye, as the sign post is just after a curve on the main road. Upon arrival, guests are treated to an eyeful of signs and helpful information about Chimpanzees, from the dangers still faced with poaching, fact boards that include their native countries and so on. Staff are always on hand and eager to answer any questions that guests have.

The guided tour is around one and a half hours long, and visitors get to see all the five stages that the chimpanzees go through, at the sanctuary. It was a delight to watch the way the carers interacted with the Chimpanzees and the fact that they knew all their names. The Chimpanzees are mostly fed a protein based diet and have access to their own water, as there are pumps in various locations at the sanctuary that the Chimps operate themselves by pushing a button.

Speaking to the staff; Mr. Willie Tucker who has been the camp supervisor at Tacugama Chimpanzee Sanctuary since its inception in 1995, and the Administrative Assistant Mr. Franklin Badeye, they both shed light on sensitization practices carried out at the sanctuary. These practices are vital for the safety of chimpanzees in Sierra Leone. Chimp number 77 came from a private residence in Goderich. The case was reported to the Tacugama Staff by one of their guests that had come in for a tour. The practice of housing wild animals such as chimpanzees is illegal and dangerous and individuals are encouraged to report such cases. When a chimp is collected, the owner is not compensated as this may encourage poaching. However, they are offered free entrance to the sanctuary.

Mr. Tucker also spoke to SwitSalone about current staff including medical personnel such as vets that care for the chimpanzees. There are 30 staff members including cooks and cleaners. In addition, there are also three groups of staff at the sanctuary – Care Staff who deal directly with the chimpanzees, Outreach Officers who carry out research on animals in the area, as well as the Educational Wing. They operate with schools. There is also a resident vet from Canada that has been working there for two years – Ishmael, also known as ‘Izzy’.  A majority of the staff are Sierra Leoneans, however there are some volunteers from Canada, Holland and Spain. When asked about requirements for volunteering, Mr. Tucker said that the two most important factors are that the individual is an animal lover, and that they also have a tertiary level of education.

The Tacugama Chimpanzee Sanctuary is located in Regent Village, and Opening Hours are Monday-Sunday with tours at 10:30 am and 4:00pm. However, there has only been one tour (10:30 am) for March and April as there is some ongoing construction. The sanctuary hosts 20-30 people per group per tour. However, special arrangements can be made for larger groups such as school children for school tours.

Tour prices vary per nationality, with Sierra Leonean nationals paying Le 30,000 per person and non-nationals having to pay a fee of Le 110,000 approximately $15.

After the tour, guests are ushered into the on site gift store. The gift store sells a wide variety of items such as customised Tacugama hats, as well as jewelry and various artifacts. Prices range from around Le 50,000 ($7) upwards.

The sanctuary provides lodging for individuals that want to experience the facility for longer than a day. There are 6 different lodges for overnight stays, and they are all named after chimpanzees that have lived at the sanctuary – Bruno and Julie are round huts for one couple and cost $90 per night. The Augusta lodge is a two floor tree house that costs $140 per night. The Christo lodge is the largest one yet, and costs $180 per night. Lastly, the two latest additions are the Mama Lucy and Philip two-story lodges that are both $150 per night.

Looking for something fun, different and exciting to do outside of the city? Why not visit Tacugama and take some pictures with some chimpanzees!