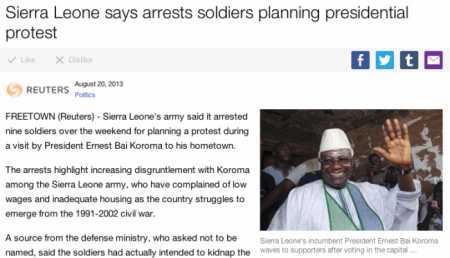 The government of Sierra Leone says it has arrested 9 soldiers who were planning a protest against the President on a planned visit to his hometown of Makeni. Over the weekend several people on Facebook posted about a military mutiny while others called it a foiled coup. A source at the Ministry of Defence has told Reuters that the soldiers had planned to kidnap the President and kill Palo Conteh, the Minister of Defence although none of this has been corroborated.

This alleged mutiny comes just over 2 months since the government dismissed very senior army officials without cause. There were those who at the time said that the dismissal of those army officers was a witch hunt against South Easterners.  Elsewhere soldiers have complained of low wages and poor housing. Last year a band of ex-soldiers attacked the Minister of Defence who they accused of misusing army funds for his personal use.

No word yet on who the soldiers are or what will happen to them.

On any given day Freetown’s forest is burning...