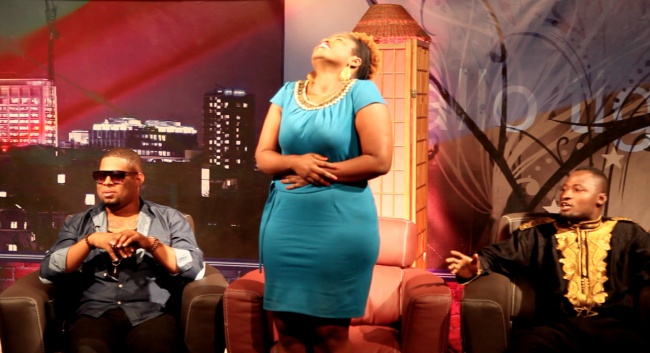 A full-figured dark skin African woman should not have a problem breaking into the Nollywood scene but Ghanaian actress Lydia Forson says this is not the case. In July I followed Forson around in Accra to learn about life as a screen diva. We met up just days before Forson was about to leave for Sierra Leone to star in a movie Desmond Elliot film.

On an interview with a local talk show host on Ghana’s Metro TV she said that many people told her she wouldn’t get far in the industry because she did not have the right looks. To them she was way to dark and too fat to act.

Later she told me that once she was to go to Nigeria to play the  leading love interest in a Nollywood production and the actor she was set to play next to initially feared that she would be too fat to be sexy. He seemed more concerned about her weight than her ability to portray the roll.

Most Nollywood screen divas tend to be much thicker than their Hollywood counterparts and rarely do we hear of African actresses being asked or forced to lose weight for a film however on closer review of casts certain trends appear. More full-figured women like Forson are rarely cast as the leading love interest. An actress that is  larger in size is often cast as the friend or mother.

Forson says being the underdog means she has to work harder to prove that not only is she talented, that she is no less desirable than those actresses that are smaller than her.

And as far as skin color Forson is hardly the darkest on the scene but again in Nigeria and in Ghana especially it seems that lighter or mixed race actors tend to have an easier path to stardom.

But Forson isn’t bitter or stuck on what she considers as mere stumbling blocks on the way to success. As a confident and self-assured young woman she says that she knows she can not please everyone. For now the actress says that her primary concern is simply to be the best actress that she can be and nothing less.