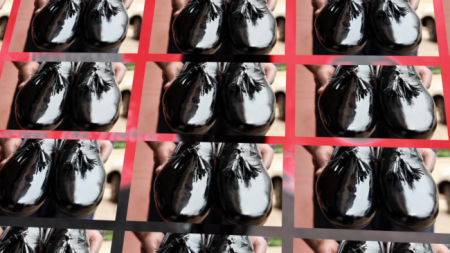 Like most young Africans his age 28-year-old Fred Deegbe still lives at home with his parents in Tesano a suburb in Ghana’s capital of Accra. His bedroom is adjacent to the garage that Deegbe C.E.O  of HTW short for Heel The World has converted into a production factory where he and his two managers supervise a half-dozen shoemakers to design what they are calling bespoke shoes.

Three years ago Deegbe says he bought a pair of Italian shoes in Ghana and asked a shoe shine boy if the same shoe could be made locally. But the boy said that leather shoes like those could not be made in here.

“It is too difficult. No. It is impossible.”

Nevertheless Deegbe went ahead and rummaged the city of Accra and found a shoemaker who replicated his shoes.

But the idea that someone felt that something could not be done in Ghana, because of some perceived sense of difficulty beyond African abilities  irritated him. So he called a couple of friends together and together they decided to start a shoe brand.

“Africans don’t believe that good things can be done here,” he said.

“So HTW is all about countering those perceptions.”

Deegbe was born in the U.S. while his parents were there as students in the 1980s. He tried to live and work in New York after he graduated from Ashesi University in Ghana in 2006,, but he quickly moved back home.

At the shoe factory in Accra HTW looks big brands for inspiration. Posters on the wall feature Nike’s Air Jordans, Virgin’s Richard Branson, The Cosby Family, and the Bible.

“Branson is there because we like his business model , the Bible because we are Christians. The Cosby family because in everything we do family comes first and the show was a positive story of African-American life,” Fred explained.

“The ‘Jordan 1’s’’ are also on the wall because Michael Jordan’s career and life epitomised success,” says Vijay Manu, Head of Production and Co-founder of  HTW.

Manu, 23, graduated from college just 2 months ago and as is mandated by the government he has to complete a year of National Service. Unlike his peers however Manu is doing his service at HTW where as co-founder he will also have a job once the mandated service period ends.

Both Manu and Deegbe say although the shoe company was not their first entrepreneurial venture, they had no idea that HTW would work.

Up until December of last year Deegbe was an unfulfilled banker. HTW was something he did in his spare time. It took a year of steady growth and local awareness of the brand, for Deegbe to get the confidence he needed to quit his job and focus on his company.

He tells a funny story of leaving the air-conditioned comfort of the bank on a hot day to go ‘visit’ a cobbler who had confiscated some HTW property and having to scold the guy as his nicely pressed bank attire drenched in sweat.

“If you told me two years ago that I was going to be a shoemaker, I wouldn’t believe it,” he says.

HTW is much more than just a shoe company. Deegbe, Vijay and  his brother Jeffrey Manu (the company’s brand guru), use HTW as a conduit for helping other Ghanaians turn their ideas from start-ups to entrepreneurial ventures. They give talks to students at local colleges and schools, Jeffrey says that they want to empower others to know that it really doesn’t take much to get into business. Jeffrey and Vijay’s parents are both entrepreneurs so they grew up surrounded by enterprise.

“The reason that most people don’t start a business is that they think they need money to start. But what they really need is a good idea, social media, and the right branding,” says Jeffrey. He is all about tweeting, and ‘tmblring’ to spread the HTW Brand.

Core to HTW’s initial growth was a concept the team says they got from reading Steve Blank’s “Four Steps to Epiphany” which argues that the key to building a brand with limited capital is to develop a  “minimum viable product” that people will be willing to pay for and then build it.

The three young men spend hours consuming business and branding books, and watching TED talks on innovation. What they learn, is adapted to the realities of running a business in Ghana. Then they pass on the knowledge to other startups who they support with grants. So far HTW has given out 5 micro grants to startups run by other young Ghanaians. The team believes that for many young people on the continent a little bit of support and guidance can go a really long way.

Back at the HTW factory a client has come to get custom shoes made for his wedding. He has chosen the “Black Turtle” a patent leather red sole lace up shoe. All of the leather and suede used to make HTW Shoes come from Europe, mostly Italy but by the time ‘King Yellow’, or ‘King Yellow Had a Cousin’ are made these shoes become unmistakably African. From the Adinkra symbols on the soles to funky names like ‘Black Mamba’,  and ‘Nyansapo’ (Wisdom Knot) each shoe confirms Fred, Vijay, and Jeffrey’s firmly held conviction that anything is possible in Ghana.

MADE IN SIERRA LEONE

Who Will Be the New Queen? Miss Universe...