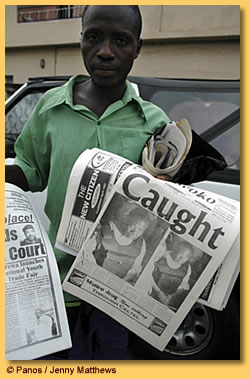 Sierra Leone’s media houses under the auspices of the Independent Media Commission and the United Nations have signed an agreement committing to non-partisan reporting in the period leading to and during the nation’s November presidential elections.

The communique, ‘The role of the media in 2012 General Elections’ was developed in partnership with different publishers and representatives of media institutions including journalists from print, media, broadcast, and radio.

Dr. Abu Bakarr Kargbo, chairperson of the event implored journalists not to take sides when covering the elections.

“The media in every society performs a crucial role in development and if you fail to inform the public accordingly, you will create more problems for the society,” he said, adding that the media is to serve as a check on the “judiciary, executive and legislature”.

After citing the genocide in Rwanda where radio was used as a tool to incite mass killings, Dr. Kargbo said that media in Sierra Leone should be careful so as to not be tribalists.

“You have to be very careful. We know the considerations of our people and that means, you should emphasize on the democratic principles and values”.

“If we take sides there will be mayhem,” he continued.

Also speaking at the meeting the Chairman of the IMC, Mr. Rod Mac- Johnson said that journalists will also be held accountable for any mishaps that occur as a result of their reporting.

“We should ensure we are not blamed for any lapses in the elections,” he said, adding that the signing of the communiqué should serve as a sign of media ownership of the elections in Sierra Leone.

The signing of the final communiqué was as a result of a one-day media forum held at the Bintumani Hotel on Monday 9th July 2012 on the theme “The Role of the Media in the 2012 General Elections”.

The session which was organized in collaboration with the United Nations Development Programmed (UNDP) attracted journalists and representatives of media institutions and organizations.