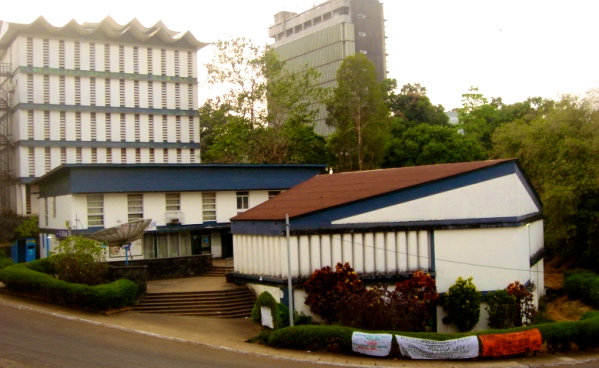 On Friday 55 Diploma II students in the Mass Communication department had their exams cancelled during a strike action by students of Fouray Bay College at the University of Sierra Leone who say they  were dissatisfied with the university’s decision to rusticate them. The 31 students were reportedly kicked out of the school after they refused to vacate dorms due for renovation.

Alfred Bockarie Mansaray, a lecturer in the photographic unit, Mass Communication Department-FBC,  said he was disappointed and felt sorry
for the students who should have taken their exams today but failed to do so.

The students were to take their photography exams at the campus in the morning. Responding to whether some of the students might be his own, he said “it is possible. But I could not identify them.”

The entrance to the university was barricaded with stones and broken iron containers with a sparse presence of regular students sitting
around quietly. A student at the university said that they had long since expected the strike.

“There are people in this campus that pose as students, but who are no longer in the school,” he said, adding that efforts must be made to improve the nature of intake in the university.

“What we understand is that they have been expelled from the campus but many of them were still staying,” he said, adding that the action
by the university was to force them to leave the campus.

The students, numbering more than 30, thronged at the Fourah Bay College this morning demanding the action taken against them be
reversed. They blocked vehicular traffic as well as normal work until the police were called upon to ensure sanity.

The head of police media, ASP Samura, said they were able to cool down the situation and that they will continue to engage the students
not to take the law in their hands. He said though the university has its own process they will also be engaging stakeholders at the university to find a way forward.

“I cannot assure you now that the matter will be addressed today,” he said.

Efforts to contact the vice-chancellor, Prof. Redwood Sawyer, proved futile; but sources at the campus said he is in contact with other
stakeholders to look at the issue. However, the student on strike said they will continue their position until the university heeds to their demand.

“We do not believe the action against most of us is justified,” said one of the affected students.