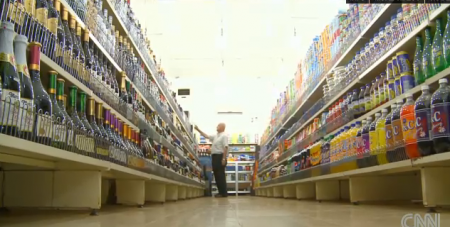 According to Duthiers the Lebanese are involved in all sectors of the nation’s economy. But most Lebanese in Sierra Leone are traders who sell Fast Moving Consumer Goods like food, electronics, car parts etc. So while the influence on the economy is very real, it is not as diversified as the report claims. What we see in the video is more a reality of where the Lebanese are concentrated–in supermarkets. While this is an interesting take on Lebanese business life, it is an incomplete story. Perhaps conversations with other Lebanese business people in other sectors might have painted a more convincing picture.

Also interviewed in the video is IB Kargbo, Minister of Information who says that the government has decided to give citizenship to Lebanese born in Sierra Leone who until now could not become citizens. Like most African countries the constitution stipulates that only those of “afro-negro” ancestry can gain citizenship. Kargbo says that the President has allowed a batch of 50 Lebanese born in Sierra Leone to be naturalized. What he doesn’t say is that each one of those Lebanese are being asked to pay an extravagant sum of $3000 for that naturalization. An amount citizenship advocate Nasser Ayoub says he will not pay although his efforts in the media raised the cause’s profile.

In short the video is neither here nor there on the Lebanese’s actual participation in Sierra Leone’s economy but for those who didn’t already know that there were Lebanese living in the country now they know.