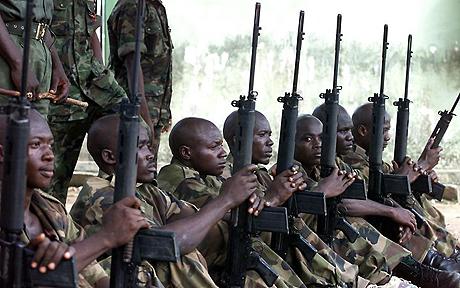 Pan-African CommUnity Movement (PACM), a grassroots organisation in Sierra Leone has criticised the government for sending soldiers from the national army as part of the African Union Mission in Somalia (African Union Mission in Somalia). PACM is a newly formed grassroots organisation committed to “self-emancipation and self determination of the oppressed and exploited Afrikan masses at home and abroad”. This is the first local public denouncement of Sierra Leone’s involvement in AMISOM.

Few weeks ago the government of Ernest Bai Koroma, announced that it will send, as promised late last year, a contingent of nearly 1,000 troops to join Rwanda and Uganda under the guise of AMISOM (African Union Mission in Somalia) to fight Al-Shabaab militants in Somalia. Apart from Rwanda and Ugandan, Kenya and Ethiopia have also sent troops in Somalia, to fight the Al- Shabaab.

We do not oppose the involvement of  Sierra Leonean soldiers in other African problems, but we believe that, in this case,  the “solution” is driven by outside forces. It is no coincidence, that over US$ 50 million have been provided so far by US for the procurement of military equipment of the Sierra Leonean  military for what will only be a war of Africans killing other Africans.

PACM wonders how Sierra Leonean soldiers can use military force to bring peace in Somalia where US forces have failed in 1993, Ethiopian troops and now Kenyan forces are failing since their invasion into Somalia, at the behest of US and imperialist forces earlier this year.

PACM maintains that imperialist forces are behind the deployment of African soldiers in Somalia. In this respect, we oppose the use of Africans fighting Africans, an old imperialist strategy in Africa.

PACM wises to state that we equally oppose all forms of violence including Al-Shabaab’s use of terrorist tactics of killing innocent people in their so-called war to institute sharia law in Somalia.

The war in Somalia, is a PROXY WAR, with the US and other imperialist forces behind it. The objective is to ensure control of the horn of Africa for military, economic and political gains. This is also the reason for establishment of AFRICOM – The US military’s Africa Command. This militarisation of Africa is not unconnected with the discovery of oil and the rise of China as a major economic power in Africa. In short, the militarisation of Africa is part of the grand plan to control African mineral (including oil) resources.

Consequently, PACM holds the view that the attempt to send Salone troops to Somalia under the guise of AMISOM, is not to help the people of Somalia,  but to support Imperialist Proxy-wars in  Africa. In that respect, PACM wish to join the progressive chorus of African peace campaigners, to oppose the new vigour of imperialism in Africa and call on the Government of Sierra Leone, led by Ernest Bai Koroma,  a seemingly willing puppet of Western imperialism and neo-colonialism, to reverse the decision of sending troops to Somalia. Instead we call on the government, to pursue a peaceful resolution of the conflict in Somalia which can only be addressed by the Somali people themselves.

Freetown: April 2012 – The Pan-Afrikan Community Movement (PACM) is a newly formed grassroots Pan-Africanist, community based movement of youths, students, women, employed and unemployed workers in urban and rural Sierra Leone. We stand for the self-emancipation and self determination of the oppressed and exploited Afrikan masses at home and abroad. We are opposed to privatisation, racism, sexism, neo-colonialism, and imperialist proxy wars in Africa. We are part of the worldwide resistance to globalisation and the struggle for global social justice.