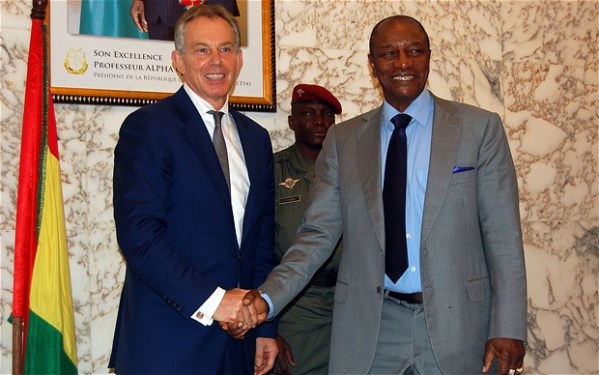 The Telegraph reports Tony Blair has been invited by the government of Guinea to set up his ever growing African Government Initiative (AGI) in Conakry. This means that Mr. Blair and ‘the Tony Blair Office’  will be adding one more African nation to thier list of presidential advisees. Sierra Leone, Liberia, and Rwanda had already signed up.

The Tony Blair Office in Sierra Leone sits inside State House in the president’s office. What is it they do? Well, they supposedly provide advisory services ranging from daily administration, economic policy, to foreign investment.

Set up as a charity, the Office doesn’t actually give any funds, or undertake development work, instead they do the very heavy lifting of advising. The offices are staffed by foreign expatriates are paid for by the charity.

Mr Blair uses his business and diplomatic relations to lobby, and advocate for deals in countries likes Sierra Leone and Guinea. The folks at the Tony Blair Office want you to believe that all this is done for altruistic reasons, and not for profit.

An AGI spokesman said: “He [Mr Blair] frequently discusses the development of AGI’s partner countries with other governments, companies, philanthropic foundations and development agencies. He has no commercial interest in any such discussions and all the work he does as patron of AGI is on a pro bono basis.”

Can you imagine ex UN Secretary General Kofi Annan setting up offices inside 10 Downing Street or at the White House?

How much sovereignty can countries like Sierra Leone, Liberia, and now Guinea claim to have if Tony Blair or foreigners are whispering “advise” on how they should be running their countries. Furthermore, if you need a foreigner to come and sit inside your office to tell you how to run it then perhaps you should not be president.