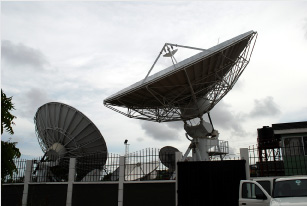 Recently the government of sierra leone announced its intention to “liberalize” the country’s international gateway. The liberalization is a precondition from the World Bank, who put up the $30million needed to fund the deployment of the Africa Coast to Europe (ACE) fiber cable to Sierra Leone.

ITU defines an international gateway as any facility through which electronic communications (voice, data and video) can be sent between the domestic networks of one country and another. Whether terrestrial or Space-based, their purpose is to aggregate and distribute incoming and outgoing international voice and data traffic.

The government’s decision to liberalize the gateway means that Sierra Leone will join the vast majority of nations that have already done so. Nonetheless, we feel that some understanding of the history and current telecommunication regulatory environment is necessary to put this announcement in perspective and address possible consumer concerns.

Six years ago, parliament passed the Telecommunications Act of 2006 a law that monopolized international telecommunication traffic in and out of Sierra Leone by naming Sierratel as the “owner” of the international gateway. Some believe that this was done in an effort to artificially prop up and provide financial cushion for the parastatal.

Prior to the 2006 Telecoms Act, Sierratel was an aging dinosaur dying a slow death. The management watched enviously as new entrants to the voice market grew in the local mobile market delivering much needed services to the masses. The demand for telecommunications services sky rocketed in post war Sierra Leone as those who were left behind during the conflict reached out to their friends and family who had fled abroad for support .

With the new Act, all voice and data service providers were  required to pass their International traffic through Sierratel’s links. This gave the company a piece of the lucrative telecoms pie without having to do much work to actually acquire the revenue.  However, Sierratel as it was in 2006 lacked the capacity to provide the necessary VSAT links to carry this traffic from the various carriers.

So management of the international gateway was subcontracted to the then newly created Teltac Africa financed by Lebanese diamond kingpin turned Telco baron Hisham Mackie. In 2006, Mr Mackie was responsible for 51% of all diamond exports from Sierra Leone. Under Teltac management, Sierratel increased prices for wholesale voice termination minutes to Sierra Leone. This in turn meant that prices increased for consumers and many low cost calling card options were eliminated from the market.

Interesting to note is that even though the Telecom Act legally required all international traffic (i.e. voice and data) to pass through the Teltac/Sierratel VSAT gateway, many corporate entities including NGOs, mining companies, GSM carriers and ISPs were still allowed to operate their own private VSATs. Many of these VSAT antennas were installed by local and foreign integrators and were deemed legal as long as the VSAT owners obtained a license from NATCOM the nations telecommunications regulatory commission.  One VSAT integrator explained that this was done because “even with the backing of Teltac, Sierratel could still not support the demand for connectivity, especially data traffic”

As the telecommunications industry developed the government through NATCOM seemed to lack the necessary knowledge of the very industry it was tasked with policing. Once they allowed ownership of private VSATs IP telephony and VoIP became a problem. The regulators could not distinguish between the two. IP telephony allows voice packets to be digitized and  transmitted via Internet protocol (IP) on the same cabling that a company uses for its data network while Voice over IP (VOIP) allows the usage of a Wide Area Network (WAN) or Internet links to transmit digitized voice packets .

The distinction between the two is important because IP telephony can exist without necessarily violating an international gateway law, i.e by using IP telephones on a corporate Local area network (LAN) or inter country  WAN a company is operating legally within the existing gateway laws. Even more importantly however by deploying VoIP toll by-pass service that utilizes Sierratel’s VSAT links a user is not violating the existing gateway law.

This explanation is important because NATCOM and Ministry officials wrongly interpreting the existing Telco act at one point banned VoIP and by extension IP Telephony. They then ensued witch-hunting missions against individuals and corporations to protect the manufactured revenue stream for Teltac/Sierratel. By 2010 Teltac was terminating over 1.2 billion minutes of voice communication per year and achieved record turnover of over 150 million US dollars. NATCOM called several meetings with representatives from the corporations, NGOs and service providers to announce that not only were VOIP services such as Skype, Gchat etc illegal but also IP Telephony.

All this is to show that if the regulators had problems understanding and applying the law in the pre-fibre optic age with low Internet penetration, what then will happen when the ACE cable is finally deployed and a myriad of services like Vonage, MagicJack, Tango etc become widely available?

As with most industries in Sierra Leone, the larger issue is at play with regards to technology and telecommunications is that of human capacity. Liberalization is all good and well but does the government understand what it really entails and is the regulatory entity prepared for it? A solution integrator who asked to not be named said that “when you appoint an architect as the chairman of NATCOM, we have a serious problem of square pegs in round holes” where supposed experts who lack serious knowledge on subject matter are appointed to head regulatory bodies and parastatals” He explained that at minimum, it should be mandated that the head of the nation’s regulatory body for Telecommunications “know the difference between a LAN and a WAN”.