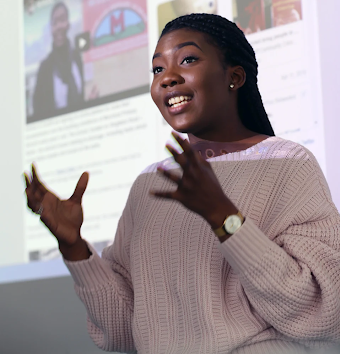 Purposeful Sierra Leone has announced its welcoming of multi-award-winning journalist, Antonia Howard as their new Communications and Media Manager and Presenter of the “Kapu Sens debate” in Purposeful’s Karo Kura series. The feminist organisation which has been in existence for five years, said in a tweet, that it was “jumping for joy” as they welcome Ms. Howard.

Antonia Howard has a Bachelor of Arts (honours) in Mass Communication from the University of Sierra Leone, and a Master of Arts (distinction) in Journalism from Cardiff University in the UK.

She started her broadcasting journey in 2014 as a presenter at Radio Life ventures, a small radio station in Freetown. She proceeded to AYV Sierra Leone where she started as an intern reporter and rose to the position of senior reporter/presenter, and later Director of News and Current Affairs until she retired in September 2022.

She has also worked for the BBC World Service on a freelance basis. She also has a blog which highlights her love for writing. She is also a Fact-Checking fellow with Dubawa.

Her media excellence has not gone unrecognised. In addition to hosting the presidential media cocktail in 2020, she received the TV Personality of the Year Award from Sister’s Choice. In 2019, she received a bigger award, when she was recognized by the Independent Media Commission as the Best Female Media Practitioner. In 2020, she was one of the nominees for the BBC’s Komla Dumor award.

A fun fact about Howard Is that she used to be a makeup artist, a skill she learnt in Ghana. She loves listening to girls’ stories of resistance being surrounded by radical and powerful feminists.