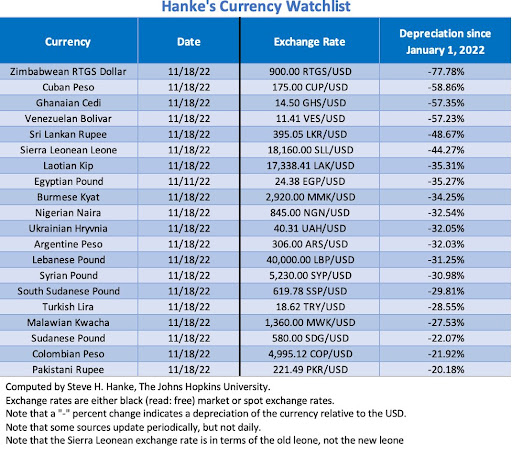 A country that rose twenty years ago from a ravaged eleven-year civil war and devastated health pandemics is yet to find its rightful course to economic stability. According to renowned scientist and professor of applied economics at Johns Hopkins University Steve Hanke, the Leone currency has depreciated against the USD by 44.27% since Jan 1, 2022.

“In this week’s Hanke’s Currency Watchlist, Sierra Leone takes the 6th place. The leone has depreciated against the USD by 44.27% since Jan 1, 2022.” Hanke wrote on his Twitter handle.

Ranked 5th poorest country in the world by the world bank using 2020 GNI per capita, Sierra Leone has also been plagued by natural disasters, especially mudslides and heavy downpours in the country’s capital. About 2/3 of the population is engaged in subsistence farming, raising rice, cassava, etc. However, Sierra Leone is one of the poorest countries in Africa that has a higher GNI than GDP. Source Mapper

As the country’s economy continues to crumble, the subsequent hike of fuel prices has caused an increase in the prices of commodities and the rate of inflation. In 2021, the Bank of Sierra Leone issued a public notice introducing new currency notes and coins, which shall be called the New Leone. According to the Sierra Leone Bank governor Professor Kelfala Kallon, the redenomination will help to boost the confidence of people in the economy of the country, and vows that the impact of this change will be positive. In July 2022, this change was accomplished with the old leone denominations still remaining legal tender and continuing to circulate.

“The redenomination of the Leone will enable our currency to appreciate against the dollar. The Leone will have more value and better serve our economy,”

However, a few months after the introduction of the new Leones, the state of the country’s economy was yet far from finding a better course, with the Ukraine – Russia conflict posing a high threat to the price of gas and other commodities. This led the Bank Governor to go on air and confessed that the country is in a very difficult situation, and as much as they have tried to mollify the hard state of the country, certain things are beyond their control. He urged his fellow countrymen to continue praying for the Russia-Ukraine conflict to come to an end.

“I also want to tell the people of this country that I am gravely sorry that I am in a situation where I know we are all hurting but I don’t have the capacity to get rid of that hurt.” Professor Kelfala Kallon.

Ever since, the price of fuel and other commodities have been skyrocketing, posing a high threat to Sierra Leone’s economy.