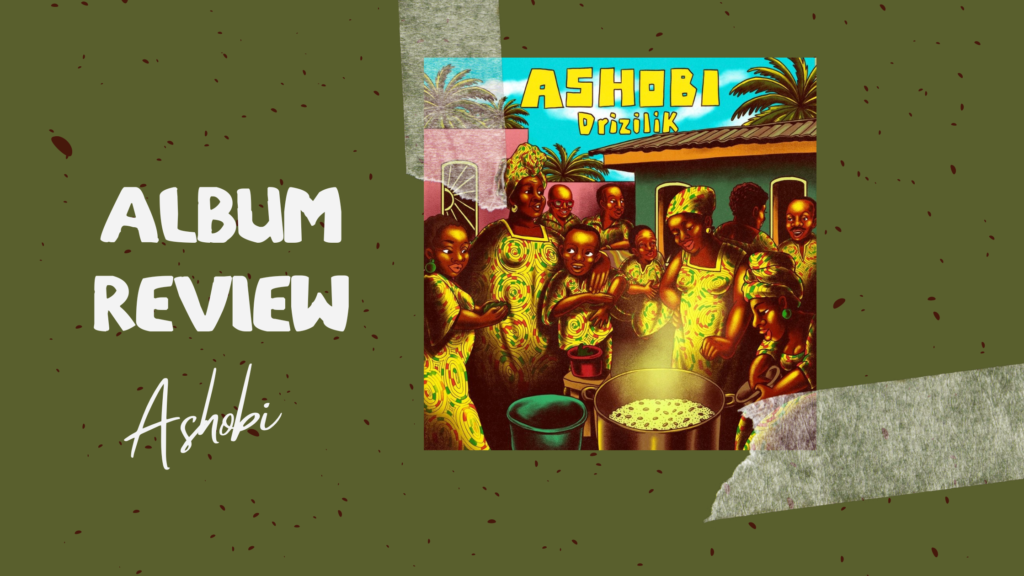 Every so often, a recording artist makes music listeners stand up and listen without prejudice. Very few have done that in Sierra Leone (Emmerson in this century, Bunny Mack in the previous). The rapper and singer from Central Freetown, born Benjamin Menelik George, has done just that since his 2015 debut mixtape ‘Ben Ten Over Ten’ and hit single “Pop Collar”. Drizilik’s latest album Ashobi etches his name amongst the greats of Sierra Leone music––this is his decade!

‘Ashobi’ is the long-awaited second album by Sierra Leonean artist Drizilik following on from 2018’s brilliant debut album ‘Shukubly’. So it’s hardly a surprise that the man has delivered an all-killer, no-filler package with a perfect fusion of contemporary West African music and a knowing nod to traditional music styles from Sierra Leone. It has been well worth the wait.

The album opens with the title track, “Ashobi,” which features Hollywood royalty Idris Elba trading verses with Drizilik. A hybrid of afro-fusion beats with a milo jazz-influenced refrain and a hook reminiscent of many funerals in Sierra Leone (the song’s hook “If you get d ashobi go down oh” is from a traditional chant often heard at Krio funerals but with different words) Idris is right to call this a classic – which he does on the intro and outro.

The album continues with banger after banger. “Lion” and “Big Artist” touch on success, while tracks like “Dig Hole” and “Fana Makit” highlight the hustle-bustle of life in Salone. On “Bad Padi” and “Tell” (remixed from a 2020 single), Drizilik waxes poetic on human behavior. “Decide” is a standout that delivers a contemporary slice of hip hop that ticks all the right boxes that a ‘sick’ or ‘lit’ tune should. And yet it doesn’t detract from the message of Christian faith in that song, a theme that continues to the Afropop gem “Exodus” – produced by Nigeria’s Masterkraft. “Fana Makit” certainly has future hit potential, and the lyrics – about youth living beyond their means – certainly hit home like every other track on the album.

“Said And Done,” featuring Skillz and Nigerian guitarist Fiokee, is a certified banger that will become a club favourite with the right push. Another standout for me is the reggae-tinged “Opin Yu Yai” with featured vocals by Mimi Wood is a hark back to Rihanna’s “Man Down”, with some added flourishes of traditional Bubu music on the outro. The closing track, ”Hype,” has a loping, hypnotic beat and more Salone milo-jazz-influenced harmonica. Drizilik closes the album on a positive note that you should essentially “do you” and not follow the hype. A great end to this 14-track magnum opus.

Drizilik has continually drawn inspiration from Sierra Leonean experiences of life, love, and city survival. But it’s his mastery of Krio metaphors and inimitable rap flow that makes for a powerful combo that makes him stand out from his peers.

In the past 20 years, Sierra Leone’s popular music has evolved with a steady stream of local acts emerging and a few becoming household names for a while.  Many will argue (myself included) that by 2007 there was undoubtedly an SL music identity that would’ve easily been exported into the right hands. While very few of that first wave of artists remain active (Emmerson, for one), a millennial decade gradually ushered in new artists who better understand where they’d like their music to be heading. It may be argued that music has not quite reached its fullest potential in terms of commercial success and art. However, I will say this – Benjamin Menelik George, aka Drizilik, is on track to be the breakthrough act of this decade. No wonder he has earned the King Of Sierra Leone’s New School moniker–a title this new album no doubt solidifies. He was told he was the future back in 2015 (as he says on the track “Lion”); the future is now, and that prediction has certainly rung true. With each track on this album as strong as the one next to it, ‘Ashobi’ is, without a doubt, a beyond-impressive sophomore effort.

Kev MacCormack (formerly Kris) is an ex-broadcaster, DJ, and music connoisseur who has had stints on Capital Radio FM and African FM (now defunct).