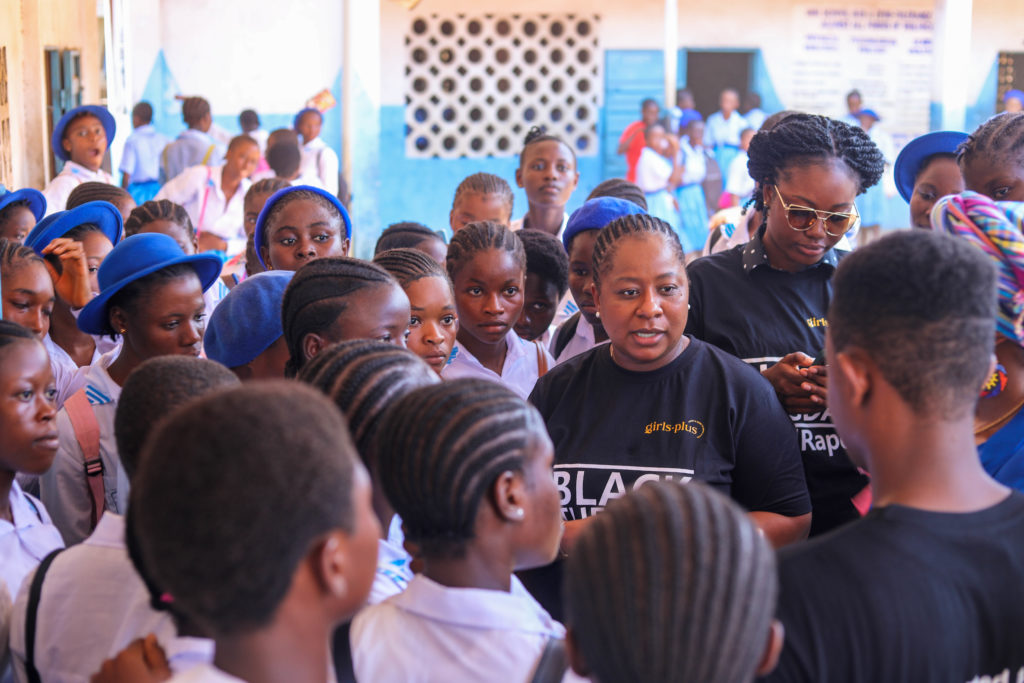 Girls Empowerment was centerstage at Waterloo when girl champions Asmaa James and Nicky Spencer-Coker held a talk with students at FAWE secondary school.

James’ GirlsPlus hosted the award-winning Black Tuesday community engagement with the theme “What It Means To Be A Girl, Our Rights, And Our Future” at FAWE to mark the Day of the Girl Child. Renowned gender advocate Nicky Spencer-Coker was the guest speaker.

“Sexual and gender-based violence is a problem in Sierra Leone. We go to communities to educate Sierra Leoneans. Our message is simple––girls have rights, and they must be protected,” said Asmaa James, Founder of GirlsPlus.

James founded the Black Tuesday Movement in 2019 as a direct response to the high rates of child rape and sexual violence in Sierra Leone. The numbers then and now are still grim. Half of all women from Sierra Leone will be sexually or physically abused or both in their lifetime. A majority of the country’s rape victims are children under the age of 15, according to reported rape data from Rainbo Centre. While laws have improved to punish those found guilty of rape, Girlsplus is going into communities to let girls know they have a right to say no.

She said girls should be able to make decisions about their life. She encouraged girls at FAWE to question authority when asked to do things against their will. She said Sierra Leonean girls resist.

“Girls refuse early marriage. They refuse to drop out after pregnancy. They refuse to be cut and stand up against FGM. Girls do positive and impressive acts,” said Coker.

One student who attended the talk said she had learned about her rights and the law.

“I now know I have the right to say no to things I don’t want,” said Ramatulai Conteh, 17, an SS3 pupil and prefect at FAWE Secondary School. She said she wants more to be done to implement laws to end rape and FGM against girls.

“Our girls will be encouraged to stand firm against their challenges,” said Bangura.

Girls Plus works with government agencies, private and nonprofit organizations, activists, and development partners to make Sierra Leone better and safer for girls so that no girl is left behind.

James says GirlsPlus will host community engagements like this in the coming months to revive the momentum for girls.