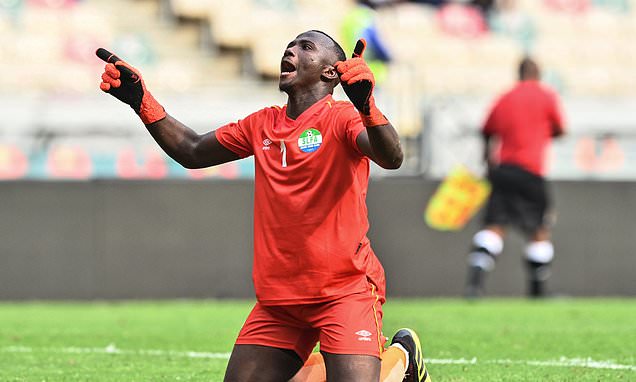 Mohamed N. Kamara the goalkeeper of the Sierra Leone national team, Leone Stars, over the weekend visited his hometown, Sendugu Village in Kambia District, and donated assorted items to his people.

The 22 years old stopper commonly called Fabianski donated 34 bags of rice to the people and according to him, the donation is part of his little way of appreciating his people as they have been very supportive to him over the years, more especially in his early football career.

Kamara is also the goalkeeper of the Sierra Leone Premier League Side, East End Lions FC. During his participation in the ongoing 2021 Africa Cup of Nations, his performance was excellent. In his AFCON debut match against the reigning champions Algeria he made crucial saves that led his side to a goalless draw with one point and he was awarded the “Man of the Match” for that game.

After keeping a clean sheet and making 7 saves against Algeria, in his second match against Ivory Coast he denied Frank Kessie’s penalty in the early minutes of the game and it ended a two-all draw for both sides. In the final group stage match of the AFCON Kamara’s outstanding performances ended after Sierra Leone was beaten by Equatorial Guinea.

However, the stopper’s performance in the tournament won the hearts of many Sierra Leoneans at home and abroad. As he headlined different media platforms across the country and outside, that blended with the team’s overall performance changed the image of Sierra Leone to the outside world.