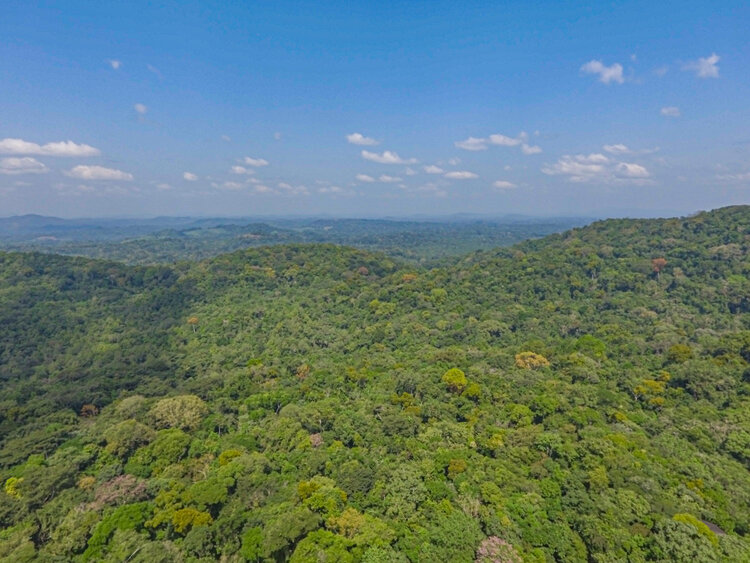 In the middle of December last year I found myself hiking through the rain forest in a pair of second-hand boots that were made for anything but feet. They were so terrible they caused a blister to form and peel on top of my toe joint. I eventually de-shoed determined to walk barefoot but someone agreed to switch shoes with me. In the midst of that searing pain, no mobile connectivity, no sound of humans but for my crew, fresh air in my nostrils and lust for the unknown I fell deeply in love. Even as I walked sally-one-side and grunted here and there, in my heart I was overwhelmed with joy.

The 77,000 hectares Gola Rainforest National Park was established by an act of parliament in 2011. To get there it’s a 6-hour journey from Freetown and an hour and a half from the town of Kenema, in the Eastern Province of Sierra Leone. The rainforest expands into Liberia and Ivory Coast with the secondary and pristine primary rainforest as untouched as it was the moment God said let there be.

We hiked through narrow paths, past trees whose roots ended far above my head. They reminded me of the Ents that accompanied Gandalf in Lord Of The Rings to Middle-earth. They were magnificent. To run my hand down the root of a thousand-year-old tree made me feel small, insignificant, and alive.

In the dimly lit morning, I had several close call falls that were stalled by a branch and my gluteus maximus which refused to be dragged by momentum on a downward path. Gravity was no match for my ancestors, a full fall was not in the reading of the kola nuts.

It was a 90-minute trek from camp to the gravesite. We crossed three streams and bridges before the climb to the burial ground began. You can ask a guide how much further into the forest, but all they know is that you will get there, they can’t tell you how long it will take.

I was the elder in the group but for our guide. With me was my crew of 20 something Sierra Leoneans, none of them had seen this side of the country before either. Their idea of an expedition into nature starts and ends on a beach. I gave crackers and water to the weakest link, a 23-year-old who looked like she would faint any moment. I reassured her that if she died in the rainforest no one was going to be able to carry her because we simply could not come and kill ourselves for an already dead person. She smiled, but I was serious.

As we approached the burial ground of the ancient Gola our guide asked us to stop. We observed a moment of silence in honor of the ancestors whose resting place we were about to disturb. The Gola gravesite is estimated to be about 400 years old and contains the remains of the Gola King Tambo and his warriors.

During the 16th Century Mane invasions led by Queen Macarico, the Manes and their human flesh-eating Sumba warriors sent a message to King Tambo. They sent him gifts and asked him to choose between war and peace. To accept the gift was to submit to the rule of the Manes and to reject it an act of war. King Tambo chose the latter.

As the Mane invaders came closer upon him and his people they retreated deep into the forest. When the battle ensued the king and some of his warriors were killed. They were buried in formation-the graves of the warriors surround that of King Tambo as if to protect him in death as they did in life.

As I touched the overgrown moss on King Tambo’s grave I was at a loss for words at the interconnectedness of our story. I always think of Sierra Leone as this last mile country disconnected from the world and yet there I was in the middle of the forest with an epic story centering us in the world. Walter Rodney’s “Reconsidering the Manes Invasions of Sierra Leone” notes that the Manes had in their employ Sumbas and Portuguese and the latter often got “paid” in captives-the spoils of war who became the earliest to be sold into slavery in Europe.

Today there are only about 28,000 Gola speaking people in Sierra Leone and an additional 200,000 in Liberia. Many Gola people now use the Mende language as their primary language due to years of intermarriage and trade. It is believed that the Gullah People of the Carolina Coast in the United States have strong ancestral ties to the Kissi and  Gola people (some believe that the name Gullah originates from Gola). Of the slaves taken to the Carolinas, Georgia, and Florida, 22% came from Bunce Island in Sierra Leone so it is not farfetched to draw these conclusions.

I have made several visits to the slave castles in Goree and Cape Coast with other African pilgrims for a deeper understanding of our ancestors and the global black experience.  It never occurred to me that deep inside of the rainforest in my own country that I would gain new insights.

Before we left the grave site we carved our names on a tree nearby to leave something of our expedition like any explorer is want to do. And then we trekked downhill another hour only to start trekking uphill in a different direction to reach the peak of the forest, a rock 500 meters above sea level that is rightly called Point of View.

I do like to think of myself as a “fit” human but even I must admit that at some point I felt more like a white human. After all na dem blant waka allabot lek dis. It had been 4 hours of hiking and our supee was probably getting cold. Mi mot wator. Supeemia!

What gave me the courage to keep going was that we came upon a stream and our guide stopped to collect water. I had a water bottle but he only had a leaf that he broke off from the banks of the stream. I quickly abandoned my bottle to learn this trick, should I ever make it on Survivor the game show at least I could fetch water. To make a cup from a leaf in the rainforest; find a large leaf, fold into the shape of a cone or funnel, find a small twig and use it to seal the leaf, and voila you’ve got a cup.

When I drank out of that stream I finally understood my class 3 teacher’s definition of water-no smell, no color, no taste! I had not ever had water that pure before and I don’t suppose I ever will again until I make it back to Gola.

It would be another 45 minutes before we made it up to the Point of View. By this time it was midday and the ugly side of Sierra Leone sun was upon us. Nevertheless, we had reached the mountaintop and the view was breathtaking. There were only two things you could see for miles and miles and miles; sky and forest. This was my country. I hadn’t traveled to some exotic destination for this experience, I was in my very own backyard.

Before I decided to set off on this journey to #MakeSierraLeoneFamous I had no idea what I would find or see. Nothing that I experienced, saw or felt in the rain forest was written in any travel guide or searchable on the web. While I was unsure of what I would unearth I believed that Sierra Leone had more, and was more.