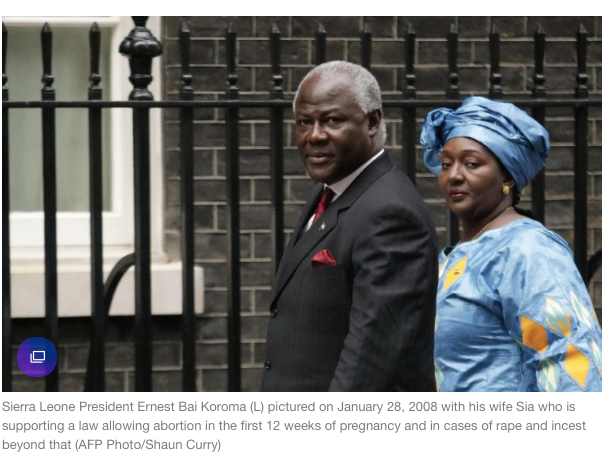 The President of Sierra Leone has for the second time refused to sign the safe abortion bill into law. He says that although the bill passed unanimously in the country’s legislature that in order for the bill to become law it must be put to referendum, that it to public vote.

Back in December the parliament sent the safe abortion bill to the president whose political party has the majority there, and the president said he would not sign the bill after a group of men now dubbed the ‘religious leaders’ met with him to protest the bill.

Religious leaders say that the bill goes against the religious morals of Sierra Leone. This same group of leaders have never once spoken out to put pressure on government to do something about the nation’s staggering maternal mortality rates, 1350 for every 100,000 births, still the worst in the world. Religious leaders who selectively choose when to be pro life are no leaders at all, what they instead are hypocrites.

According to Sierra Leone’s constitution, once a bill has passed with two-thirds majority vote in parliament the President no longer has the power of veto. The Speaker of the House of Parliament can without the President’s consent sign the bill into law.

Will that happen in Sierra Leone? Definitely not, this speaker serves at the pleasure of the President and his political party. What is important to note is that the opponents to the safe abortion bill have not proposed and alternate solution to the law currently on the books that makes all form of abortion whether those of rape, incest, illegal.

In 2011 three studies conducted by the government of Sierra Leone and Ipas identified “unwanted pregnancies in all regions of Sierra Leone as a significant problem, contributing to thousands of maternal deaths and injuries, infertility, poverty and orphaned children.”

They also found 1632 post-abotion cases, that is women treated in hospitals as a result of having gotten unsafe abortions elsewhere. They estimated that this number could have doubled had all cases been treated in the hospital. Ipas reported that “the Sierra Leonean government spent between U.S. $112,000 (Le481,600,000) and U.S. $230,000 (Le989,000,000) annually in personnel and medical supplies to treat post-abortion cases.”

If as the President has said the act should go to referendum, it will not pass, why? Well because Sierra Leone is one of the most backwards places in the world when it comes to women’s rights, and women’s health. Until there is regime change there probably will not be any additional discourse on this bill, once it goes to referendum that is where it will end, abortion will remain illegal.

The President of Sierra Leone has missed out on an opportunity to create a pro-woman legacy, Sierra Leoneans will have to settle for remembering him as the president who made Women’s Day March 8 a national holiday. And that is about progressive as this President is going to get on women’s issues.