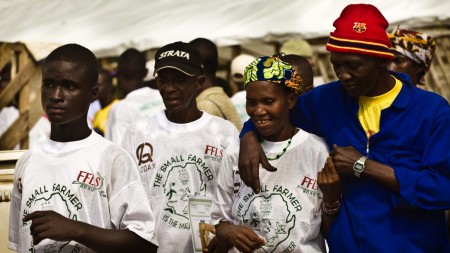 Addax BioEnergy Sierra Leone Limited, a subsidiary of the Addax Oryx Group has announced that operations at it’s sugar to ethanol plantation in the Makeni area will be lessened for the next six months. Addax says it will retain most of its local staff, but that it will reduce the number of expatriates on the ground during this period.

The following release was posted to the company’s website on June 24 2015:

Over the next six months, AOG, as main shareholder, and Addax Bioenergy SA have decided to downscale their pioneering sugarcane bioethanol operation in Makeni, Sierra Leone, and to conduct a review of all options for the future.

Since its inception in 2008, this Greenfield project, run by AOG subsidiary Addax Bioenergy, has had to overcome a number of unforeseeable events. These have had a significant impact on the timeframe, costs and revenues initially planned. They include the Ebola outbreak in May 2014, which not only has had a terrible human toll on the country, but has also led to substantial delays as most of Addax Bioenergy’s contractors declared “force majeure” and left the site.

Taking advantage of the naturally-low level of activity during the rainy season when no revenues are earned, costs will be reduced and operations downscaled. The number of expatriate consultants will be reduced. At the same time, most local employees will be maintained and assets kept in good working order.

The review process will explore all options for the operation’s future. AOG and Addax Bioenergy intend to work closely with H.E. President of Sierra Leone and his government to find the right way forward for the operation and for the country.

Run by AOG subsidiary Addax Bioenergy, the operation produces sugarcane ethanol and green electricity from the biomass to power the plant and provide excess energy to the national grid. The first production took place in May 2014 and, while production stops during the rainy season from May to November, the 2015 season has seen the first exports of certified bioethanol to Europe.

The operation has been recognised as a model for responsible investment in Africa. Two years of social, health and environmental baseline studies were followed by innovations in land leases, a Farmer Development Program (FDP) that trained over 2,300 smallholder farmers and increased food security in the region, on-the-job skills training and employment for over 3,600 people in the high season.

In 2013, Addax Bioenergy received the first African certification by the Roundtable for Sustainable Biomaterials (RSB). It also became the first operation in Sierra Leone to be registered as a Clean Development Mechanism (CDM) project of the United Nations Framework Convention on Climate Change (UNFCCC), and the first sugarcane-based power generation facility for ethanol production to be registered as a CDM in Africa.

The Beginning of the End of FGM in...