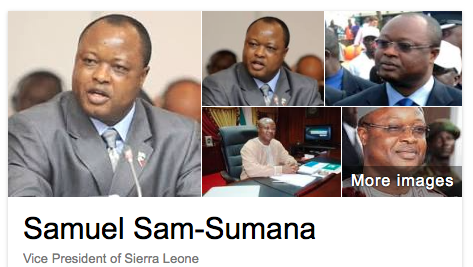 Yesterday the Vice President of Sierra Leone was on the state television where he denied ever having applied for asylum or even fleeing his house. He said that renown journalist Umaru Fofana lied about any correspondence between them that led Fofana to file the report that he had fled his home.

The Vice President wants us all to believe that Umaru Fofana made up this whole incident. Meanwhile all the evidence is to the contrary. Government spokesman Abdulai Baraytay told the AP that you have returned to your house. Now if you never left VP how is it you returned? And why would an official from the US Embassy make a comment about your asylum request if you never made any. Why would the APC party release a statement addressing your request for asylum if you hadn’t done so?

Perhaps Mr. Vice President you are suffering from short term amnesia brought on by stress. But if you ask us who we think is lying whether it be you or Umaru Fofonah I will say that it is you sir that is not being truthful. Something many of us will not be surprised off, as even your own political party says you are known to falsify information.

In any case make you take your time di tok foh di place.