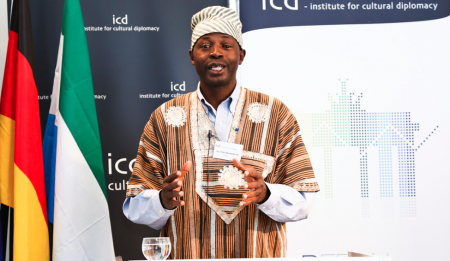 Peter Bayuku Konteh has resigned from the post of Minister of Tourism & Cultural Affairs. A press release from the official State House website says that Konteh resigned for health reasons.

Two local news papers report that the reason for his resignation might be related to non-health related issues.  The New Citizen writes that Konteh may have resigned because of actions taken to remove one Mr. Ahmed Wurie as Chairman of the National Tourist Board.

Konteh was the District Council Chairman of the Koinadugu District Council before his cabinet appointment in 2012. He was schooled and worked in Italy prior to his return to Sierra Leone. According to Global Times Konteh will return to Italy.

Meanwhile Awareness Times news headline for today was this story Cabinet Minister in Italy ‘Ebola Rice’ Scam as Presidency Looked Askance Upon  about a certain cabinet minister who has made a “soft exit” over suspicious ebola fundraising from Italian charities.

If Mr. Konteh is indeed ill, we wish him a very speedy recovery.

It is up to the President of Sierra Leone to appoint a new Minister or someone to act in the role.

The Politics of Genital Mutilation in Sierra Leone