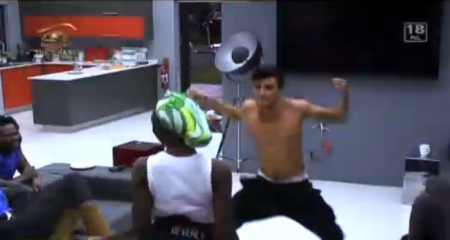 If Sierra Leone’s Big Brother rep, Micheal Bassey doesn’t win this year’s game, at least we know he’ll take the prize for performing the most sexually overstated strip tease known to Africa.  Last night Bassey and Beverly had a dance off and Bassey stripped down to is briefs. He did enough things with his hips to make even the most grown up of women blush. He grinded on Beverly so hard that I cant imagine that she is not a bit bruised from all that hip action. As far as entertainment goes, the Ruby house is definitely putting up a great show.