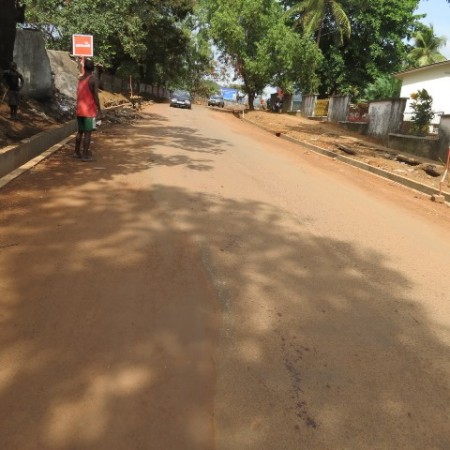 Kingston Upon Hall Way is still stained with the blood of a man police killed a day ago. Officers of the Sierra Leone Police shot and killed an armed man, but eye witnesses on the scene say the killing was unjustified. They say the police shot the man when he was already down and no longer posed a threat. The gunshots from this exchange were heard in the communities surrounding Lumbley in the West end of Freetown.

According to ASP Ibrahim Samura, head of Media and Public Relations of the Sierra Leone Police Force, a group of police officers were on beach patrol in the Lumley axis when they received a distress call about an armed man in black trousers, and a black jean jacket. The Police said that when they got on the scene they attempted to talk to the man known simply as ‘Donald’ when he shot at the police. The police returned fire and shot the man who later died.

Eyewitness report that the deceased (known as Donald to them) visited the beach often where he would hang out with the boys there. As far as they know, he had come back to Sierra Leone from the US.

On one of his street visits the boys on the beach said someone noticed that he had a gun tucked into the back of his jeans. They reported it to the police who told them to alert them the next time Donald was around.

So yesterday when Donald arrived at the beach the same informant (who asked not to be named) notified the police who came armed and positioned themselves far away from the man and sent a gardener to go call the victim.

When Donald found out the police were after him he tried to escape over a fence.  A handful of armed police officers were already waiting for him. Donald then fired into the air so that he could make a break for it. As the Police took cover, Donald ran. The police then chased him, until one of them shot the victim on the leg. According to our witness Donald was struggling on the ground when one of the officers walked closer to him and shot him in the chest. The others then went over and took his body away.

According to a man who says he worked for the victim as a gardener, Donald started carrying a gun after her was robbed by a gang on the beach. This gardener who was on the scene during the shoot out believes that the police’s action was uncalled for.

“The Police deliberately shot him, they killed my friend,” he said.

“If they had walked over to him silently and try interrogating him, he would have given them the gun. They were unprofessional, they just acted on their accord,” he added.

Another who witnessed the entire shootout told me he was shocked to see how the police reacted. He played out the incident from where it started to where Donald was gunned down by the police.

“There were more than 20 officers and Donald was so scared he had no choice because the police were also shooting at him,” he said.

“One of the officers jumped over the golf club fence and ran to the front. He was the one who shot Donald first on the leg then walked over and shot him at a very close range. I was standing right here. If Donald had any ill intention, he would have shot most of us since he knew he was going to die anyway. But even after they shot his leg which rendered him hopeless, the officer went further and shot him on the chest”, this second witness added.

The Sierra Leone Police however disputes this side of the story. ASP Samura, said that the entire happened in one place and that there was no shootout. The police position is that the victim fired two shots and that it was the returning single shot by one officer that shot and killed Donald.

Also, the police claim to have no identification of the victim, and that they are still trying to find out his nationality. A witness on the scene says he saw the police remove the victim’s wallet which contained his documents.  According to this witness, they even took off the victim’s gold rings and silver chain that were on him. ASP Samura denied these claims.

The case is still under investigation.