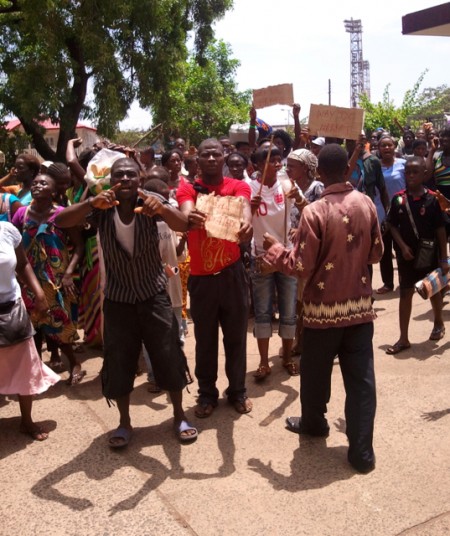 “Where’s the market?” is what hundreds of traders chanted as they marched in anger. The traders said that they were victims of Operation WID, a government effort to rid the city’s streets of hawkers and petty traders. The crowd of mostly women and some young men said that a joint force of the Sierra Leone Police and Metropolitan Police Officers had stopped their business on the axis of Eastern Police and Kissy road.

They marched with placards up to Youyi Building alleged that they were forcefully removed from their normal business places without any prior notice from the Forces. Even though they were recently advised to push back, the traders said they were assured that they will only be removed from the streets when an alternative market would have been prepared.

“We are tired of being treated this way”, said Saidu Sesay, who was acting as the leader of the aggrieved group. He explained that the police forces use extra and unnecessary brutality when ever they go on Operation WID.

He went on to state that President Koroma had in a meeting with them agreed that the operation would only be carried out with prior consultation from Mayor Gibson and the Minister of Trade, Alhaji Osman Boie Kamara. But Mr Sesay said no one had informed them.

“I have been doing business at East-end Police for the past ten years and taking me from here will cause more suffering to me and my family”, said Musu Kamara, a single parent of three. What she earns from her trade on the streets she uses to pay her children’s school fees.

A shirtless man held a placard that read – Stop the unnecessary harassment and provide us with a market. The man later identified himself as Sorie Sesay. He had dropped out of secondary school and taken up a trade in second hand electronics along Kissy Road. He said politicians should remember their promises.

“During campaign time they told us that we will continue to do business here until they construct a new market for us, but today they are pushing us away because elections are over,” he explained.

The traders waited until they forced the Minister of Trade to emerge from his office. Usman Kamara promised the to look into the matter.

“Please go home peacefully I will handle this as soon as possible and will get back to you,” he appealed.

President Ernest Bai Koroma on January 5th 2013 at the forecourt of State House launched the Waste Management, Improved Road Safety and Decongest Traffic program, code named Operation WID. This was supposed to be his commitment to fighting lawlessness in the country. The streets are more motorable than before, but there is a generally held belief that this is temporary. If the traders don’t have a place to go, they will come back to the streets.