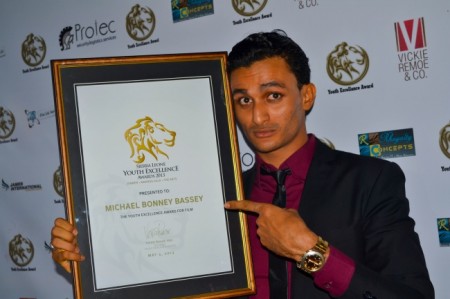 A 22 year-old mixed race actor is one of two contestants representing Sierra Leone in this year’s edition of Big Brother. Micheal Bonney Bassey studied Drama at the Fouray Bay College and is an alum of the prestigious Sierra Leone Grammar School. He says his two proudest moments so far are; to be  the first in his family to attend university, and winning the 2013 Youth Excellence Award for Film.  In just 2 years of being a professional actor Micheal has featured in 10 films including Diamond Wahala, The Change, Secret Murderer, Desperate Chicks, Beyond Sacrifice, and the Blazer.

In his BB interview, Bassey says his strategy to win the $300k up for grabs is not having one at all. He intends to play the game as it comes. Bassey is definitely one to watch as he will have no problem getting the votes especially from his many female fans. He is in the House of Rubies.

Remember that the most important part of Big Brother is that YOU VOTE.