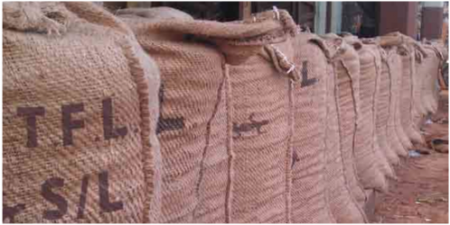 Agriterra Limited a multinational food trading company has acquired 1208 hectares of farmland just outside Kenema for cocoa cultivation. The 50 year land lease is 100% owned by Tropical Farms Limited (TFL) a subsidiary Agriterra since July 2011. TFL is the cocoa and coffee company founded by former presidential aspirant Julius Maada Bio in 2008. Bio is TFL’s chief executive while Rupert Day is its current country manager.

Agriterra’s 2012 financials states that TFL now “has three main hub stores and 41 satellite stores with a direct buying register of more than 3,500 farmers across the country”.

There is no mention of Mr Bio’s involvement or ownership of TFL except for in his profile circulated during the elections.

So far, Agriterra reports that “a nursery of 1.6 hectares currently contains 250,000 seedlings in the germination process, which once matured, will be used to plant a 200 hectare area that is in the process of being cleared.” They have 160 workers from the surrounding communities.

Andrew Groves, Agriterra chief executive says, “Through TFL we have already established a successful cocoa trading business.  With this acquisition and investment we are now entering the second phase of our growth strategy focussed on developing our own plantations.

“Importantly, there is significant growth potential for our Sierra Leonean business which is already contributing at a Group level and complementing our expanding Mozambique beef operations.  We have an extremely strong treasury, having received an initial $28 million from the sale of our legacy oil asset, and I look forward to completing additional acquisitions of land and building shareholder value further.”