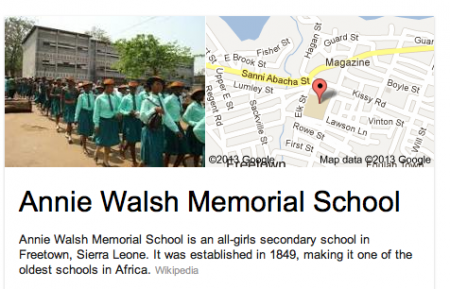 The government of Sierra Leone wants to dislocate an educational landmark that predates the country itself. Alumni of the Annie Walsh Memorial School,  have started an online petition to stop the government and keep the school at its current location. Founded in 1849, AWMS is the oldest all girls secondary institution in Sierra Leone, arguably the first of its kind in West Africa.

Awoko Newspaper broke the story on February 8, when it reported that Bishop Julius O.P Lynch, the proprietor of AWMS had received a letter from the Office of the President stating that it was the government’s intention to turn the school grounds into a market.

This move would according to the President’s Office reduce congestion in Freetown’s central trading district as the city seeks to remove petty traders off the streets.

Those against the move argue that AWMS should be preserved as a historical site and not torn down.

My concerns however are simply that this is a lazy alternative to bigger and more pervasive problems. There is no shortage of markets in Freetown. The issue rather is that the government needs to create more opportunities for those who migrated from the provinces to hawk plastic made in China goods in the city to move back home. Additionally the government needs to check the nations outdated trade laws that now allows Lebanese and Indian foreigners to do retail. This forces many indigenous traders to the bottom of the trading food chain which for now is on the streets.

Building more markets will not keep people selling pens, kola nut, and second-hand clothes of the streets. The traders who may be in the position to occupy a market where Annie Walsh stands right now, are already trading in shops and stalls. Those remaining on the streets have limited capital, and cheap wares that add no value to the economy.

So while the argument that the Annie Walsh should remain because it is part of Freetown’s heritage is valid, I believe that the real issue is that the government is lost for ideas. I did not go to the Annie Walsh, neither did my mother or my grandmother. But the school and its alum must not pay for the government’s lack of innovation and creativity.

When you break down AWMS and turn it into a market and this doesn’t our problems then what?

Below is an excerpt from the letter written to the proprietors of the AWMS.

“As you are no doubt aware, when the Annie Walsh Memorial School (AWMS) moved to its present location on Kissy Road, Freetown in 1865, the environment was ideally suitable for a school that pursued excellence in all areas including high academic performance, sound discipline and a solid Christian foundation.
However, the passage of time, has witnessed a massive growth in the city’s population and
concomitant expansion of trading activities eastwards, the area occupied by the school has become an unsuitable environment for the pursuit of academic excellence.
As Government intensifies its efforts at waste management, improvement of road safety and decongestion through “Operation WID” the compelling need for relocation of the AWMS to a more ideal site has been identified.
The selection of the site will be at the behest of the proprietors of the AWMS and arrangements will be concluded with Government for acquisition of the land and construction of the new school. The land vacated at Kissy Road will then be utilized for the construction of a modern market to be occupied by traders that are being removed from the streets of Freetown.
His Excellency the President, has instructed me to bring this proposal to your attention, so that it can be initially considered by the Church and School authorities.
Please be informed that His Excellency looks forward to a favourable consideration of the proposal contained herein.”

Let My Gate Be Opened