7500 Metric tons of fuel to salvage shortage in Sierra Leone 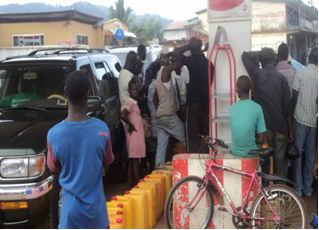 The outgoing minister of Trade and present Chief of Staff, Dr. Richard Conteh, has today allayed fears that the price of fuel will be increased despite an ongoing shortage in the country.

“The boat is approaching territorial waters and by noon tomorrow should dock in Freetown,” he said, adding that they have informed the officials of the Sierra Leone Ports Authority that when the boat arrives it should be allowed to dock and fast track the process of offloading.

It has been a week of long queues, and transport woes.

Conteh said there was a general shortage on the West Coast of Africa but gave no evidence as to how this relates to national shortage. Sierra Leone does not import fuel from its neighbors.

“The boat coming with the fuel is from Europe and is with 7500 metric
tons of petrol.,” he said, adding that another boat will also come with more fuel.

“We have discussed with the National Petroleum to send their request of fuel,” he said.

The minister also disclosed that Government has reviewed the subsidies
of fuel in the country. He said before now, the subsidies covered all sectors in society but that now companies will pay more for fuel while prices for local consumption remain the same. He didn’t say which companies would pay more.

The minister however warned that any one caught smuggling fuel will be brought to book. The shortage of petroleum commodities has led to the increase of fuel price in the country with most drivers queuing indefinitely
without a drop for their machines.

In the black market drivers have reported paying up to at Le15, 000 per litre, instead of the normal pump price of Le4, 500.

Mohamed Turay, a commercial driver, said either he buys fuel from the black market to continue with his work or he would have to sit back at home and do nothing.

“Most fuel stations are closed. The  few open sell in ration. I spent two days at a filling station at Bai Bureh Road and only get two gallons of petrol,” he said.

In the East end of Freetown, people have to pay three or four ways to be taken to Up-Gun instead of the usual one way fare.