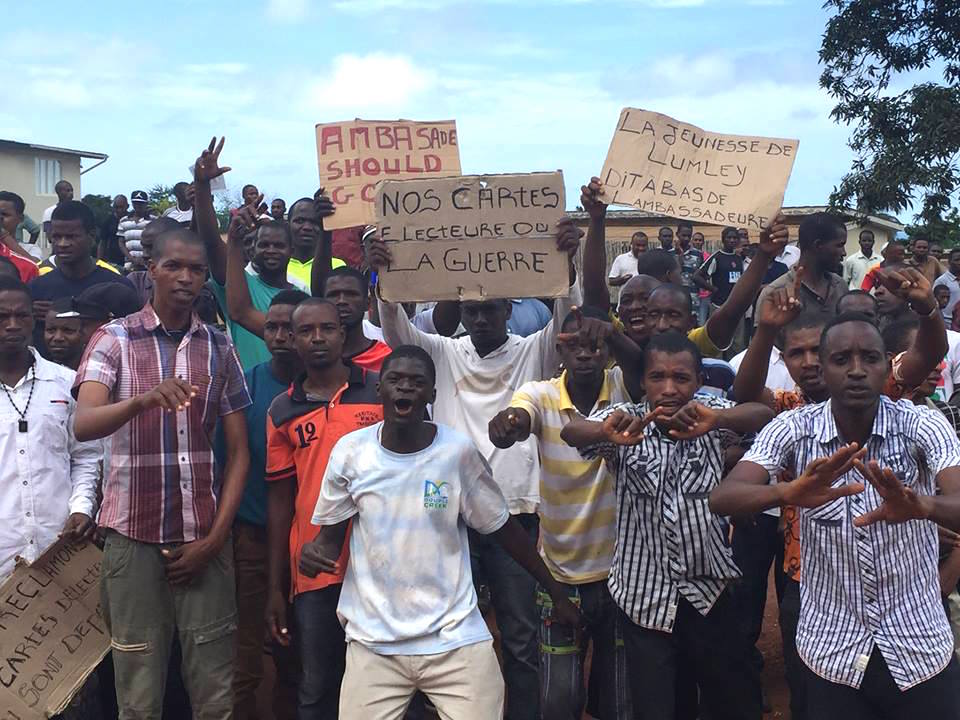 The Sierra Leone Police has arrested 24 Guinean nationals who were amongst protesters who barricaded the entrance to the Guinea Embassy earlier this week. A couple hundred Guineans claimed that the Embassy staff, including its Ambassador had deliberately delayed the issuing of their voter ID registration cards to prevent them from participating in their country’s October 11 presidential elections.
The protest which started peacefully ended in chaos following an attack on the Embassy Building by the protesters destroying the gate and pelting stones until the Police were called on the scene.
Head of Police Media Brima Kamara said they received a distress call from the Guinean Embassy that they were under attack. Upon their arrival police officers were greeted by  a chaotic scene of couple hundred angry protesters
“Twenty four of them were arrested and released on bail and are to be reporting to the Police on a daily basis as investigation continues,” Kamara confirmed.
Sallieu Jalloh a representative of the opposition Union of Democratic Forces [UFDG] said many of the protesters believed that the Ambassador intentionally delayed the distribution of their voter ID cards in an effort to rig the elections in favour of the ruling party. Jalloh said that they did not trust the elections would be fair.
“They have distributed voting papers already marked in favour of the governing RPG party and we are very much aware of that.”
Fode Camara, the Guinean Ambassador to Sierra Leone denied the allegations when contacted by SwitSalone, he said that the delay was caused by the shippers entrusted with transporting voting materials to Freetown.
“I have nothing to do with elections,my role is to facilitate the process and not conduct it so I wonder how I can rig it as it is being alleged by these people,” Ambassador Camara said.
The Electoral Commission of Guinea has a team of their officials in Sierra Leone who will be assisted by the National Electoral Commission to ensure that elections conducted in Freetown are free and fair.
Ambassador Camara confirmed that elections will be held on Sunday as planned as the voting materials have been delivered at the Embassy and are in the custody of the electoral officials and the National Electoral Commission of Sierra Leone who will be conducting the elections at specific areas across the country.