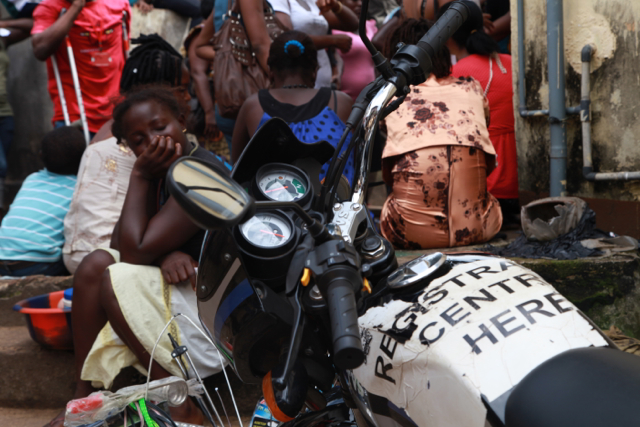 A woman sleeps after long hrs waiting to collect her voter ID card in Freetown. This was the day before the deadline

Despite UNDP governance support to the National Electoral Commission (NEC) in Sierra Leone worth $11.5 million dollars, residents of the capital today received their voter ID cards in squalor. Standing on a cesspit tank  at the back of a dilapidated NEC office on Henry Street a crowd of mostly young men and some elderly women waiting impatiently . A soldier blocked the back entrance as he shouted the names of those whose voter ID cards has been found. Tomorrow is the last day to collect voter ID cards to vote in the November 17th elections.

People grumbled out loud at the time and conditions in which they had to wait. At 1pm a man still waiting for his turn complained that he had been there since 10am. There were no chairs provided for those waiting. The cost of renting one plastic chair is about 500-1000 Leones ($0.10-$0.25)

Several people leaned against the building’s walls while others sat on the dirt.

One of the elderly women there was given a chair and she sat on top of the cesspit tank. Just behind her was a pile of rubbish.

While the rest of us waited outside to collect our voter ID cards several VIPs walked right in to the building just to walk out again with their cards.

One woman who arrived in a fancy Mercedes Benz M-class came with a personal armed bodyguard. Together they parted through the crowd and  made their way into the building. Inside she was given a seat in the shade of the building’s veranda in plain view of the hundred or so people who waited outside.

Meanwhile Binta Bah, a fulani woman, in her late 50s still recovering from what she said was a bout with malaria sat on a bench outside in the heat.

Ever so often those present would break into discussion about the squalor and NEC inefficiency.

“These people don’t care about us. Sierra Leoneans don’t like each other. How can you leave people to come to a place like this?” asked a middle-aged man.

Not so far away, someone else said, “No wonder there is so much cholera in Salone”.

A NEC spokesperson who I called on the phone said that people should have come earlier to get their voter ID cards. He said that on several days no one had come to collect their cards and now everyone wanted to do so at the last-minute.

I asked why knowing that most Sierra Leoneans would wait till the deadline to collect their cards had NEC not made provisions for more staff for the last two days.

I asked what they had done with all the money they got for the elections? He told me that it wasn’t my money and then he hung up the phone.

NEC got $4 million from the US Government and 2 million pounds from the UK for the elections. They also got $1 million more from Nigeria. I did not mention 8 million Euros from the European Union.

That the National Electoral Commission could not provide chairs for folks to sit while the waited is pathetic. That they made us wait in the backyard of a rundown house next to a latrine, cesspit, and rubbish is shameful. People deserve much better than that.

But we all of us there waiting could guess why we were waiting in shit.

“This house probably belongs to a relative of someone who works at NEC. They must have paid millions of leones to rent it. If we are sitting here like this it is because of corruption. Di money dey beng, na game don play,” said one man.

In Sierra Leone most often when things don’t work the way they are suppose to at the government level it is not because they don’t have the funds.

Someone somewhere cuts corners, keeps a large share of the money for themselves leaving the masses to suffer.