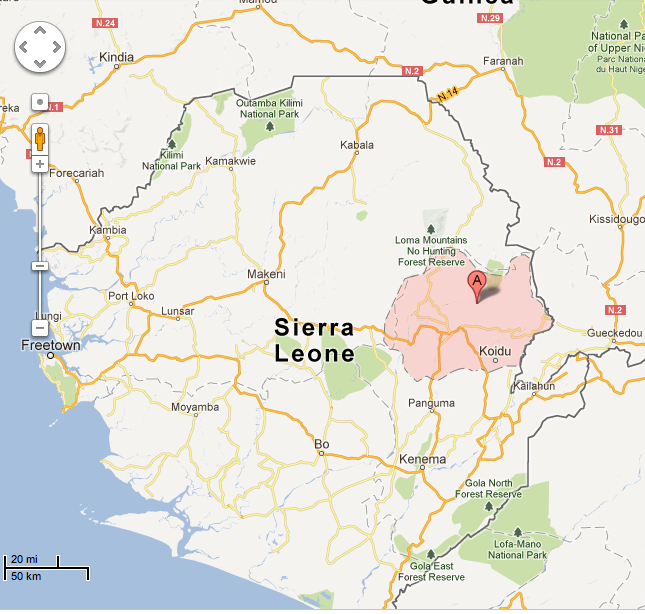 Despite ongoing anti-violence public service announcements for the 2012 parliamentary and presidential elections, incidences of political violence have started in some sectors of the country. on Saturday Kono District became the latest embattled area.

One of the victims, Ali Balebale, who lives in Yengema Road, Koidu Town, said supporters of the SLPP pelted his house with stones leading to the damage of some of his properties. He denied having anything to do with the alleged throwing of stones in the rallying crowd. Balebale said he was shocked to hear threats that his house would be set ablaze.  Two police officers were stationed at his house to protect him and his family.

Mohamed Dumbuya, a business man in Koidu Town,  said that the attack was planned by an in-law of former president Kabbah and other strong men of the SLPP. He said Balebale was attacked because he is a popular APC figure in the township.

But Mohamed Jabbie, a supporter of the SLPP in Koidu Town, said that there was no truth to any of that.

“The APC is trying to cover their attack on us,” he said, arguing that they see no reason to attack a member of any party in Kono.

The police spokesperson and head of police media in Sierra Leone, Assistance Superintendent of Police, Ibrahim Samura when contacted today said that the matter was under investigation. He further warned that the police will take robust action against people committing crimes in the guise of politics.

He said police investigation will look into all the claims and make sure that action is taken to deter to others.

In Freetown, many residents are shopping today with the fear that traders will not sell on Tuesday when the APC will rally.

Hawanatu Koroma, a teacher of the Sierra Leone Muslim Brotherhood Secondary School in Wellington, said the city will overflow with supporters. The traders will give up selling to join the rally.

“The last rally we saw all types of people in the streets and there was standstill everywhere,” she said, adding that the same may happen on Tuesday.

After a clash between supporters of Sierra Leone’s People’s Party and the All People’s Congress that left 10 wounded in Kono on October 27 2012 . Swit Salone reporter Alpha B. Kamara filed this story from Freetown.