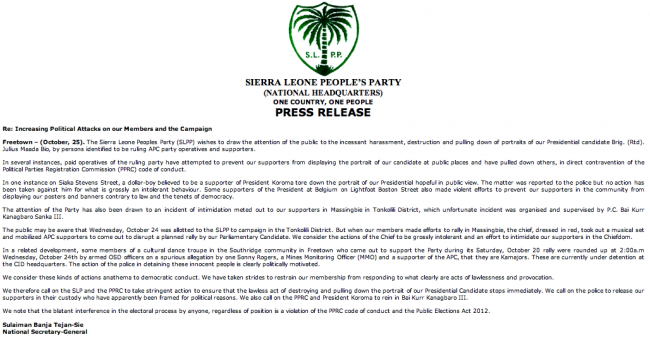 In a statement released on Friday the Sierra Leone People’s Party has listed several grievances against the APC. The SLPP alleges that the Sierra Leone Police on one occasion on the 20th of October arrested members of a dance troupe coming out to support the party after the dancers were accused of being Kamajors.

The release also says that Paramount Chief  Bai Kurr Kanagbaro Sanka III of Masingbie in the Tonkolili District prevented a planned rally by an SLPP parliamentary candidate. Lastly, the opposition party says that posters of its presidential candidate Julius Maada Bio are turned down by APC supporters. The party is calling on the police, NEC, and PPRC to take note as the laws of Sierra Leone guarantee certain rights to all political parties.