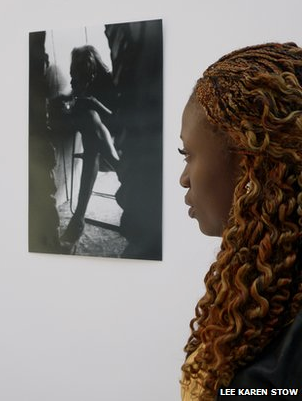 Francess Ngaboh-Smart is a 30-year-old female photographer from Sierra Leone whose first international show “The Freetown I see” is going on now at the University of Hull-Wise in the UK. She studied photography under Karen Lee Stow who conducted a workshop in Sierra Leone back in 2007. Francess who earns a living from the pictures she takes in Freetown says that she could have fallen into prostitution like many of her peers. But with her camera she can not only  support herself and her family, she also tells the stories of the life she was able escaped.

“Something I would never forget was losing my friend to one of the effects of poverty; forced prostitution,” says Francess. “Just like me she was raised by a single parent that held firmly to the view that education is better than silver and gold.

“But as early as age 15 when she lost her mother and had no relative to make her continue her education, she resorted to selling her body to provide for her basic needs. Before she knew it, she got pregnant. As a consequence of not getting prenatal medical care she lost her life to maternal mortality in the hands of a traditional birth attendant.

“Against this backdrop photography introduced into my life a purpose, because I feel that I have lived deeply and fully. I can recognize a well-made over face to cover domestic violence. I can tell a teenage drop-out girl and know the reason why it happened. I can sense sexual abuse when it is coming, and know the areas that need allocation of budget or aid. In short I know the story; I am the story and can highlight it better through pictures.”