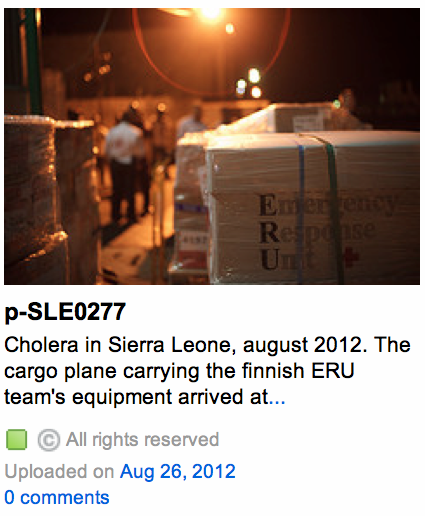 A team of 13 health care workers with 20,000 kilograms of medical supplies have arrived in Sierra Leone from The Finnish Red Cross and Red Crescent Society from Finland to help support the Sierra Leone Red Cross Society’s efforts to contain the cholera epidemic.

There have been over 20,000 cases of cholera and and over 400 lives lost since the outbreak began. President Koroma has called the outbreak a humanitarian crisis. The special cargo plane, loaded with drugs, doctors, nurses and other medical equipment, landed at the Lungi Airport on Saturday August, 2012.

The technical head of the Finnish team, Mr. Jari Kymalainen, said they are in Sierra Leone to help control the spread of cholera.

“Our aim is to strengthen the Sierra Leone Red Cross Society to be able to fight the cholera outbreak in Sierra Leone,” he said, adding that they will be establishing two stationed cholera clinics in the country and several sub-units to penetrate into the interior of the country.

The team is expecting to stay in Sierra Leone for a month at which time they hope to provide positive solution to the fight against cholera.

Mr. Kymalainen said they will be focusing on cholera prevention, treatment and awareness. Meanwhile, the Presidential Task Force on Cholera has declared free treatment for cholera patients in all government health facilities while iodine is also supplied to households throughout the country (with instructions on how to use it).

GSM companies are also sending text messages to subscribers to inform them about the free medical treatment for cholera cases. The director of disease control and prevention in Sierra Leone, Dr. Amara Jambai, is afraid the outbreak might go out of hand.
“The epidemic is expected to peak as the country is in the middle of the rainy season,” he warned during a press Briefing held at the Ministry of Information on Thursday.

He said efforts must be made to address the problem. The most affected areas are slums and poor residential areas, where hygiene facilities are poor. Mohamed Jawara, a teacher of the Muslim Brotherhood Secondary School, said it is because of the poor sanitary facilities that cholera is raging.

“We used to have sanitary officers to ensure communities are kept clean and that is what we want the government to start paying emphasis on,” he said.

While figures are being calculated on the cholera death rate in the country, some observers are still skeptical about the figures so far made public.