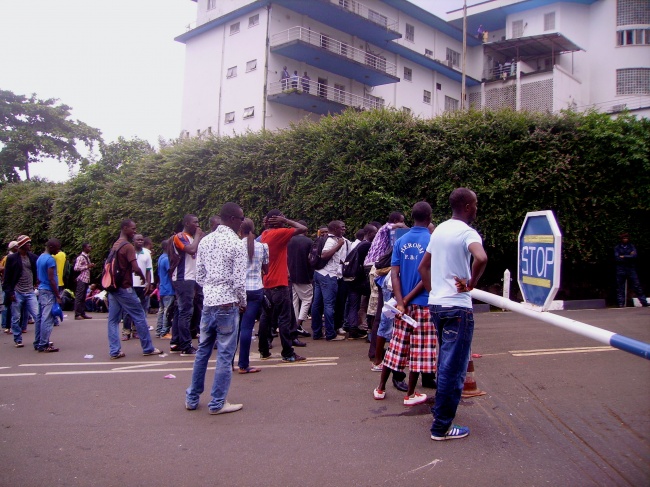 Expelled students from Fourah Bay College yesterday morning marched angrily to State House just after they were forced to leave the campus by personnel of the Sierra Leone police.

Accompanied by some of their colleagues and sympathizers, the students sang songs as they walked towards State House with expectation to see the President and Chancellor of the University of Sierra Leone, Dr. Ernest Bai Koroma.

According to one of the students who identified himself as Mohamed, they were waiting to sit the day’s examinations when police personnel stormed the campus and forced them to leave.

“Some of our colleagues were apprehended and we don’t know where they are,” he noted.

Another student who had followed to support his embittered colleagues said he was hoping they would get the support of the president.

Marches to the Office of the President in Tower Hill have become commonplace since Dr. Ernest Bai Koroma occupied State House. His predecessor Tejan Kabbah worked from home at the Presidential Lodge in Hill Station.

“We have been here since this morning and no one has come down to talk to them,” said a sympathizer, adding that officials at the university have called the affected boys ‘a bad sight to society’, suggesting that they were behaving like ‘rebels’.

The boy, who asked to not be named, fearing that he may suffer the same plight as his colleagues if seen by officials left suddenly.

Angry and swearing at the police the expelled students were barred them from getting close to the building by a checkpoint leading to State House.

The strike action by the students started on Friday after 31 students from various faculties, including the law, were expelled from the campus for disciplinary reasons.

State House staff gathered on the veranda to watch the students down below. There was no sign of the President.