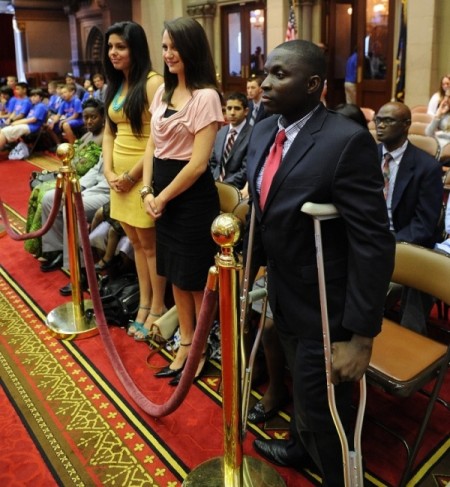 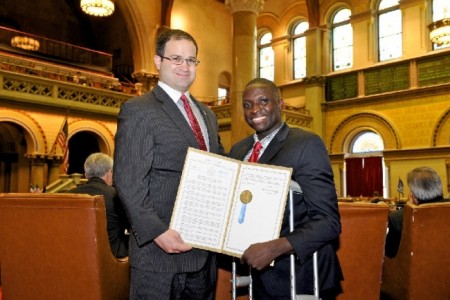 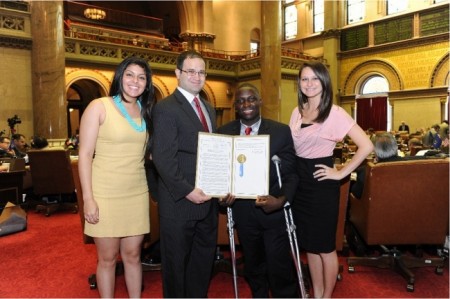 The New York State Assembly has presented Salifu Kamara a student at American University from Sierra Leone with an award for “Outstanding Contribution to Education”. Sponsored by Assembly member Edward Ra from Albany, Kamara was recognized for education advocacy for children from his village in Sierra Leone.

A citation presented to Kamara say: “The work you do each day is amazing and inspiring. As a thinker and doer you are a role model and a believer in change.”

Kamara is founder of the Global Network for Children in Crises, an international non-profit organization based in the US, that works to provide school supplies, and scholarships to the disadvantaged in his hometown of Bafodia village in Sierra Leone.

Speaking at the ceremony, Kamara said that he was pleased to have received the award.  “I strongly believe that a nation can only succeed to eradicate poverty,  if her society is well schooled with formal education especially the young generation.”

“His contribution and commitment to the cause of young people cannot be underestimated,” said Mr. David Davies, Communications Director of MESSEH International which is the institution responsible for promoting Salifu’s humanitarian activities in the US.

Kamara who describes himself as a “voice for the voiceless” has made it his life mission to work for those affected by the civil war in Sierra Leone. Disabled by polio, rebels executed his parents and siblings during the war. Kamara emigrated to the US six years ago and he has since  been involved in activities to support those he left behind in his village of Bafodia.

Kamara is currently a student at American University in D.C.

The Olympic Smile that beat them all

Royal Dynamite: State of the Union

In Nigeria, film adaptation of ‘Half Of A...

Brand News: PrinceZamira.com is having a big blow...