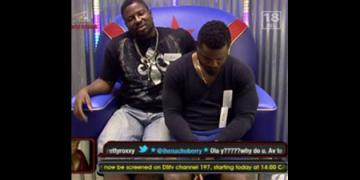 In their Diary Session , Ola and Chris sat with heavy hearts, prompting Big Brother to ask them what was on their minds.
Ola broke the ice by declaring that after consultation with the House Doctor, he would like to Voluntarily Exit the Big Brother House.

A sombre-looking Chris added that he understands completely. “Yes, this is a game. However, we can’t play with our lives.”

“Health is wealth”, Ola added. The two were instructed by Biggie to leave the Diary Room and speak to their fellow Housemates, to explain the situation.

Ola sought the exit based on his high blood pressure which the medical team has urged him to seek better treatment.When asked in a dairy room by Big Brother what their predicament were, Ola stated that he will like to quit the Big Brother due to health issues..Chris and Ola, who both entered the competition as friends will have to leave the house …

Well even though I sympathize with them I must admit am selfishly happy about their exist as this brings our two ‘Salone’ sisters closer to that winning money…still keeping my fingers crossed and hopefully praying for the best for Zainab and Dalphin..