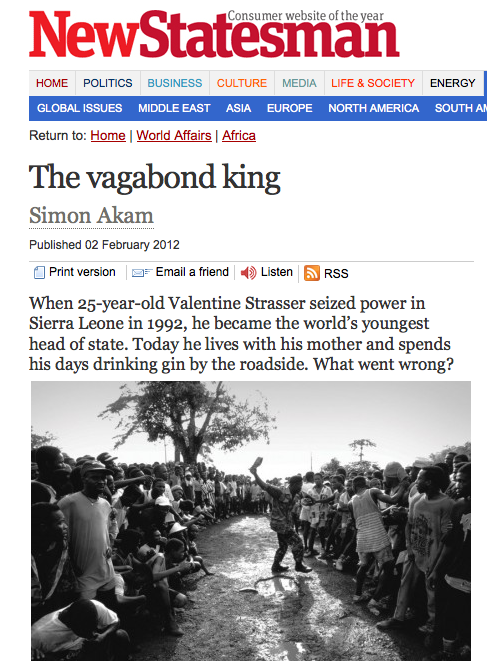 The NewStateman has just published an article on Valentine Strasser written by reuters Sierra Leone correspondent, Simon Akam. The title of the article, Vagabond King is an allusion to an opera set in Paris in 19th century where the main character, is ‘king for a day’ and has to save the city from ruin.

In this long form feature profile of the former military head of state, Akam has managed to bring together all the key elements of Strasser’s rise and fall from power. It traces his early military career, being injured, and on to negotiating with the US Ambassador of that period as to the American view of his regime.

A key point in this article is that perhaps Strasser, was chosen as the face of the NPRC junta not just for his education, but because the others thought him to be weak. Historian and Professor Joe Allie said, “He was chosen in spite of, not because of, his leadership capabilities”. This point seems really crucial if we look at how well Strasser has fared in comparison to other members of the NPRC regime.

The rest of the article which you can read here chronicles the arrival of foreign mercenaries, Strasser’s difficulties in the UK, and the conditions of his current life. But you also get a glimpse of the inner conflicts and possible psychological trauma that Strasser is forced to deal with on daily basis. He seems stuck between a pan-African rhetoric, and reconfiguring his memory of what really happened in the 4 years he was in power. Reduced to living in poverty on a pension of just $50 a month, it is hard to beleive that in 1992 at age 25, Strasser was the leader of a country of 5.5million people.

What you wont find in this article however, are the words of Maada Bio, Karefa Kargbo, and Komba Kambo, all three previous members of the NPRC currently living in much better conditions in Sierra Leone.