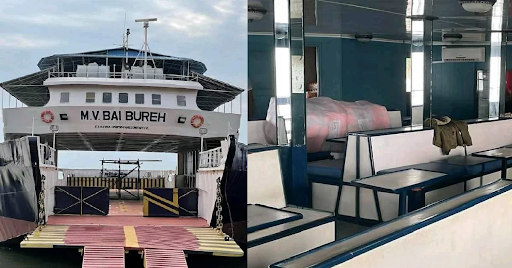 The Managing Director of the MV Bai Bureh ferry, Francis Jamal Martin, has threatened to take legal action against the Mahera management and the Sierra Leone Maritime Administration if he is not compensated for the damage done to his ferry, after both ferries collided on January 4, 2023. Mr. Martin was speaking at an interview with Radio Democracy where he said that there were no fatalities during the accident, but his ferry was badly hit, and a couple of damages occurred, estimated to the sum of USD 7000.

“The vessel cannot operate because of the damages that were caused to it”, said Mr. Martin, adding that he has forwarded a report to the Maritime Authority, but he has yet to get a reply.

In response to this, the General Manager of the Mahera ferry, Alusine Daramy, said they are not paying anything in indemnity to the MV Bai Bureh management, as the collision was their fault.

Mr. Daramy said since ferry operations started in this country, this is the first time such an accident is happening. According to him, the MV Bai Bureh captains did not use their usual route, and because the weather was foggy the Mahera captains were unable to see their way clearly. By the time they could notice, it was already too late to decelerate.

He said an attempt was made, but ferries do not stop immediately like cars. As a result, the Mahera ferry collided with MV Bai Bureh. Mr. Daramy added that this was caused by the MV Bai Bureh’s “failure to avoid an accident”.

The two ferries move at least one thousand passengers, mostly workers, business people and students, between Freetown and Lungi on a daily basis. The MV Bai Bureh ferry covers seven miles at sea between Tagrin and Government Wharf in Freetown. The MV Mahera ferry and another – MV Freetown – which was not involved in this accident, cover four miles at sea between Tagrin and  Kissy terminals.