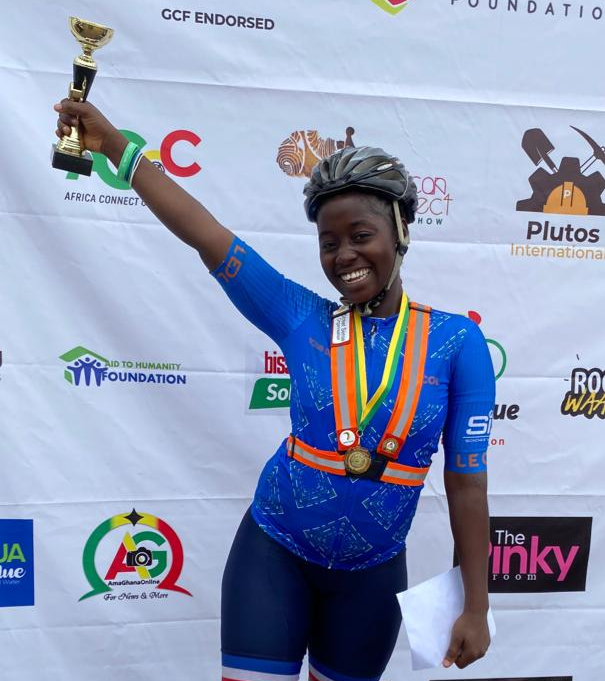 Lunsar Cycling Team’s Deborah Fatima Conteh took victory this Saturday, April 16, 2022, in the prestigious RideAfrique Accra Criterium in Ghana’s capital city. It is the largest criterium in that country.

Conteh took an amazing victory in the women’s race beating a 20-rider international field in a sprint finish. She watched the riders in the pack, fought hard to stay in the bunch, and trusted her speed in the end.

Speaking after the race Conteh thanked her team and sponsors.

“I would like to say how delighted I am to have won this amazing race. I am thankful especially to the wonderful Africa World Airlines, who sponsored the flights for this trip – without which we would not have been able to attend.”

The result is Sierra Leone’s first international cycling victory in over a decade, and secured Conteh’s place as the top female rider in the county, with a strong claim to Commonwealth Games selection later this year.

Conteh recently took victory in the women’s race at the Science In Sports Tour De Lunsar, claiming the prestigious blue jersey for the best overall female rider. The ticket to Accra was one of her prizes for this win.

Jalloh and Kamara were ruled out of contention by bad luck and crashes, while Sesay was able to finish in the leading pack.

Overall 2022 Tour de Lunsar champion Ibrahim Jalloh reflected on the race, where he was not able to repeat his home success.

“I can say that it wasn’t for me today. With the crash and the puncture.  I was able to watch and support my teammates from the sidelines. I look forward to coming back next year and competing for the win!”

“RideAfrique Ltd is happy to have welcomed Sierra Leone cyclists to our city. I congratulate Conteh on her impressive victory and look forward to welcoming the Lunsar Cycling Team again in Accra before too long.”

The Lunsar Cycling Team offers its thanks to Ride Afrique organizer Richard Agu, Simon Cobbina who first created the connection between the Ghanaian cycling scene and Lunsar Cycling, and Kelly who hosted the riders at her AirBNB in Accra.