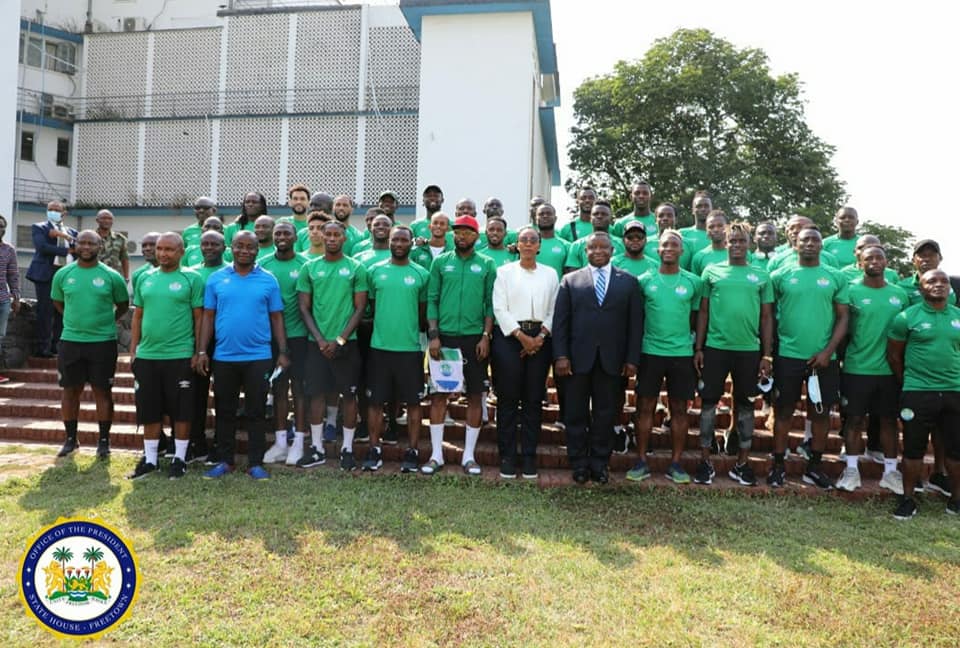 Dr. Julius Maada Bio, the president of Sierra Leone, on Tuesday, January 4, 2022, bid a sent off farewell to the country’s national men’s football team, Leone Stars ahead of this year’s Africa Cup Nations in Cameroon.

The team of 28 players and officials visited the president and the First Lady Fatima Bio at State House in Freetown. Leading the team was the vice captain, Mohamed Medo Kamara, who in his statement thanked the president and the people of Sierra Leone for their support to the team over the years and assured that they will play as a team and make the country proud.

Head Coach, John Keister also thanked the government for their unprecedented support in promoting and developing football and other sporting disciplines in the country. Team manager, Babadi Kamara in his statement said the greatest honour of every player was to play for their country, and that the people of Sierra Leone had supported the players all the way. He further admonished the team to win and make the nation proud.

The First Lady wished the team good luck and said that she was happy because greatness, through football, was coming to the country. She added that the success behind every football team was a result of hard work and dedication. Moving forward, she urged the team to put smiles on the faces of Sierra Leoneans.

In a brief farewell statement, President Bio said he was glad to say goodbye to the national team in a special way, adding that the country had been in the wilderness for 25 years. He, therefore, said that the team should go to Cameroon with the only objective of winning the trophy.

“Go into that field and make Sierra Leone proud with success. We have started making our presence felt on the global stage. Go and continue on that path”, President Bio stated.

However, the team will depart Sierra Leone for Cameroon on Thursday, January 6, 2022.